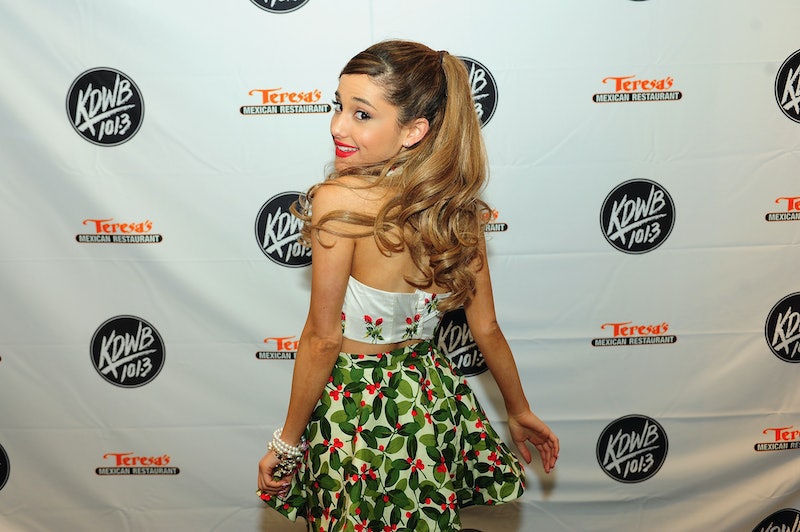 Ariana Grande is not happy with the body-shamers on the internet. After the "Love Me Harder" singer performed at the NBA All-Star game on Sunday night alongside Nicki Minaj, some viewers snidely remarked that the petite singer barely had a booty to shake compared to Minaj, whose "Anaconda" video proved she was the queen of shaking what your momma gave you. Instead of letting the mean comments go — which would be understandable, considering that celebrities are pretty much treated like crap on social media 24/7 — Grande fired back with her own body-positive message. Ariana Grande commented on Minaj's Instagram video of the performance that every butt — large, small, and inbetween — are "fucking awesome," which is way better of a statement than the last one she made about booties.

Maybe you remember Grande's last statement about her own butt, which came just after "nude photos" of the singer were released online in that gross 4chan hack. According to Grande, the pics were fake — something she really wanted fans to know because her "lil ass" was a lot cuter than the one they photoshopped on her. Sure, she was trying to laugh off what was obviously a difficult situation, but bragging about her cute butt — and more importantly shaming people with bigger ones — wasn't exactly the best way to go about it. But Grande appears to have moved on from the slightly body-shaming tweet and has instead decided to embrace all body types. Good for her.

That's not to say that Grande's favorite booty isn't her own. She still thinks it's pretty freakin' cute, which is nothing to be ashamed of. Here's her comment on Minaj's video, which appears to have since been deleted.

Keep on shaking that pretty, cute, petite ass of yours, Grande. And keep saying stuff like this.