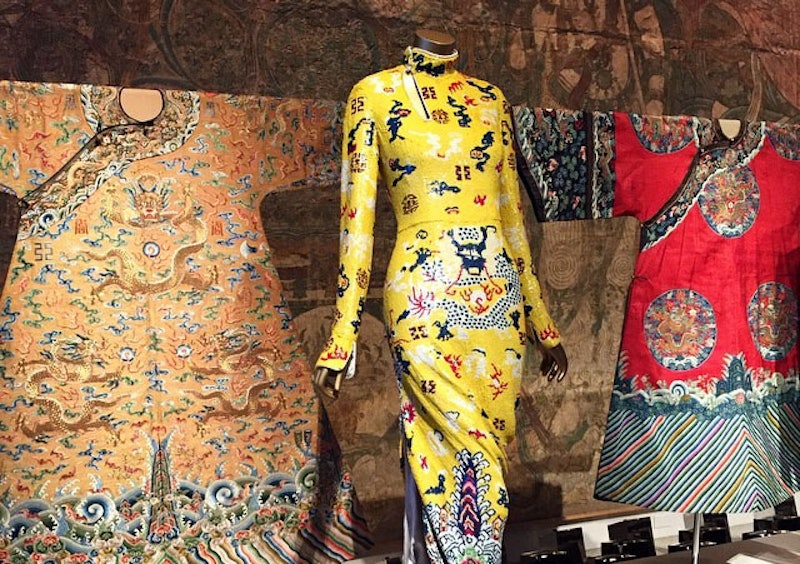 It seems like it was only yesterday when Beyoncé, Sarah Jessica Parker, Rihanna, and other A-list celebrities sashayed up the steps of the Metropolitan Museum of Art’s Costume Institute Gala to celebrate Charles James and his iconic work. As the fashion elite — and the rest of us — eagerly await the 2015 exhibit "China: Through the Looking Glass" and its accompanying star-studded gala, the MET held a press conference today to preview the exquisite items from the upcoming collection.

Judging from the photos taken at the press briefing, “China: Through the Looking Glass” could potentially surpass last year’s inaugural exhibit "Charles James: Beyond Fashion," which will once again be held at The Costume Institute’s Anna Wintour Costume Center. This year also marks a partnership between The Costume Institute and the MET’s Department of Asian Art. The exhibition will even extend to the museum’s Chinese galleries and showcase paintings, porcelain, and other types of art. The exhibit — formerly called “Chinese Whispers: Tales of the East in Art, Film, and Fashion" — will be overseen by noted and influential filmmaker Wong Kar-wai, while the May 4 gala will be co-chaired by Jennifer Lawrence, Gong Li, Marissa Mayer, Wendi Murdoch, and Wintour.