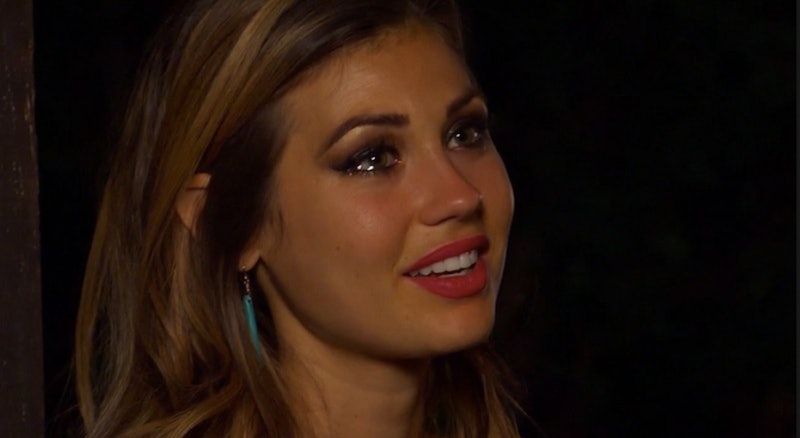 I think we all had a feeling Britt would be eliminated on The Bachelor , but I don't think any of us expected it to happen the way it did on Monday night. It's been more and more obvious recently that she and Chris Soules aren't meant to be — after all, she was pretty horrified when she saw exactly how small Arlington, Iowa is on Sunday night's episode, and it's obvious she wouldn't be happy living there. But as it turns out, the reason she went home had nothing to do with Arlington at all. After a very brief, emotionally-charged conversation before the rose ceremony, Chris eliminated Britt — and if we're to believe the words coming out of his mouth, it was basically because she stood up to him.

Britt had decided before the rose ceremony that she was going home, but she wanted to talk to Chris first. And of course, it turned into Chris once again tattling on another woman in the house (Carly) for talking about Britt to him in confidence. And in the end, Chris decided to let Britt go based on what Carly said, without accepting Britt's attempts to explain her side of the story. This is incredibly ridiculous for a lot of reasons, but mostly because Chris has consistently seemed to give favor to people who betray other people in the competition. Britt tried to apologize for speaking her mind when Kaitlyn got the rose, but he wasn't hearing it, and in fact said he preferred to be with a woman like Carly (because women who gossip is a group that he's got a thing for?). For some reason, this guy loves throwing other people under the bus and he loves letting women throw each other under the bus. Anything to deflect the blame off of taking ownership of his own decisions, right, Chris?

And the fact that she left initiated a celebration that was almost like the bottle popping party that happened when Kelsey was eliminated? Not the best look for the other women, since it was clearly out of jealousy. Recently, everyone — even the generally kindhearted Whitney — has been saying things like, "Britt is so pretty, she deserves to be sent home." Regardless of Britt's compatibility with Chris, there's an important lesson that The Bachelor season has shown us: This process is a messed up for all involved — even the "pretty girl" that makes everyone feel a little insecure in their relationship... with the man they're all nonsensically sharing.