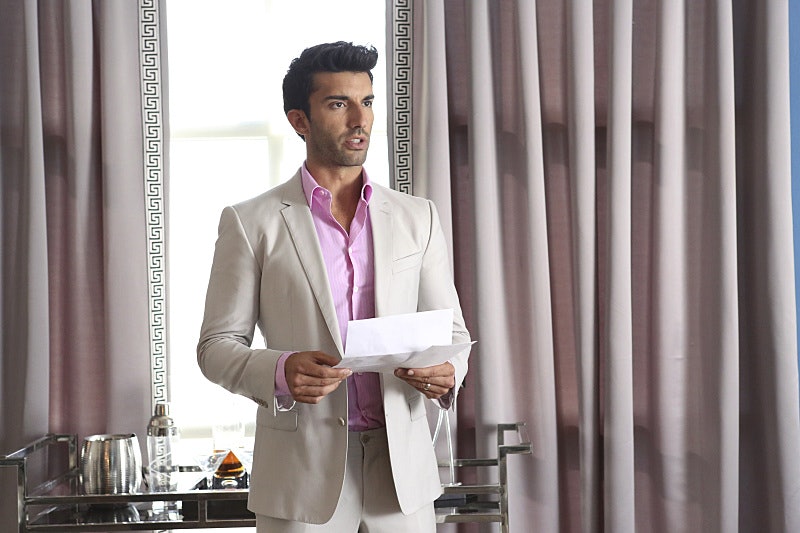 "Chapter 14" of Jane the Virgin finally had Jane fully recognizing the telenovela elements that are going down in her real life. After thinking that Rafael may be in communication with his father Emilio (who is actually dead), she discovered Roman Zazo staying at the Marbella — but it was Zaz's twin brother Aaron (and Rafael knew about it). While an identical twin fits perfectly into the whole world of telenovelas, I've now become suspicious to take anything at face value. Yes, we have heard about Roman's brother before (when Petra knew his name after saying she didn't know Zaz had a brother), but can we be sure the one who is alive is Aaron and the one who is dead is Roman? Or that Aaron is actually as good as he appears to be?

Jane talked about the importance of trust on Feb. 16's episode and I'm with her that with everything going on in the world of Jane the Virgin, she's allowed to be a baby bit suspicious of Rafael or anyone. I know I am suspicious of almost everyone's motives at this point — excluding Jane. And Aaron almost seems too perfect to be true. Rafael hired a private investigator to locate Aaron and discovered a fascinating past: Aaron was working at an orphanage (possibly the most stereotypical job a person appearing to be kind would have), had been kidnapped by a drug cartel (and seemingly has no current emotional scarring from that recent event), and practices Jainism (which is a religion that is against all violence).

Considering his brother was part of Sin Rostro's drug ring and was sleeping with his best friend's wife, it seems the brothers couldn't be any more different. So if that all seems too good to be true — it probably is. (Plus, can we revisit that drug cartel thing?)

But I'm not the only one suspicious of Aaron — Petra was practically horrified when she saw Aaron in the elevator at the Marbella. Aaron played dumb of knowing who Petra was when he first saw her, but then mentioned he had heard about her. If Roman and Aaron didn't talk, how would he have known about her? Hmmm ...

There is enough drama going around Jane the Virgin without having to worry about identical twin drama, but bring it, Zazo brothers! At least, actor Alano Miller gets a second chance on the show.