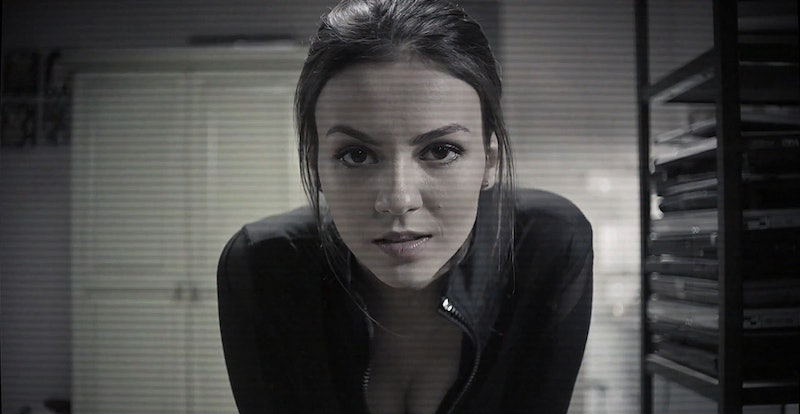 "I have such high hopes for you." Eye Candy's Flirtual killer has uttered this extremely creepy line about his (or her!) stalking obsession Lindy a few times now, and on Monday night's episode "ICU," the killer finally proved that he is willing to do more than just torture and murder people to get closer to Lindy when he helped her and Tommy save hundreds of lives during a computer virus crisis at an NY hospital. So what exactly does the killer mean with that line and how does helping Lindy solve a case and save lives serve the killer's ultimate purpose with Lindy? And even more importantly, what is this ultimate purpose?

The series took a break from Flirtual killing yet again this week when Lindy helped Tommy with a favor from an old friend/ex-girlfriend. Apparently at the ex's hospital (she's a surgeon), everything controlled by a computer or online source began to fail in the hospital, leading to nurses and doctors passing out in operating rooms during intense procedures as well as important machines failing and consequently killing patients. Tommy asked Lindy to help him look into the problem "off the books," and Lindy got herself admitted to the hospital to do some work on the inside. She found that someone had hacked their way into the hospital's mainframe and let loose a virus that could only be turned off with a kill switch and a authentication code. This is where the Flirtual killer came into play.

It seems Lindy's new friend at the hospital, a patient named Erika who had health problems with her heart which then extended to her liver thanks to a drug trial she was put on via the hospital, had decided to kill herself and then set a virus across the whole hospital as punishment for the hospital ruining her chances to get a heart transplant, thereby saving her life. Erika and her boyfriend Mark (who FYI played Tom Riddle in Harry Potter and the Chamber of Secrets ) both worked at a anti-virus company and they created the hospital crushing virus together, however, he did not realize Erika would release it and endanger so many lives.

After checking security footage and learning Erika swallowed the kill switch for the virus, Tommy and Lindy asked Tommy's ex to help cut the switch out and deliver it to Mark to stop the hospital's ruin. However, Erika installed an authentication code that even Lindy couldn't crack. When she was finally losing hope, the Flirtual killer was revealed to have been stalking Lindy through the hospital security cameras and texted her to see if she needed help to get the code.

The killer gave Lindy the code and subsequently saved hundreds of lives. Lindy clearly regretted using the killer's help but what else could she do in that situation? So what does the killer want? Clearly he or she is interested in playing some kind of game with Lindy and wants to see if she's worthy for what the killer has cooking. The problem is, it's hard to figure out what exactly that endgame is.

Here's what I'm thinking, the killer is clearly interested in Lindy for having the same tech savvy brilliance as himself or herself. So finally Lindy proves to be a worthy collaborator or opponent. But the killer has also revealed that he or she knows something about Lindy's past, more specifically her past with her sister Sarah who was kidnapped a few years earlier. Did the killer have anything to do with Sarah's kidnapping? We still don't know that either. But maybe the killer is just hoping Lindy will join his or her creepy quest to find perfection and by helping her save lives, the killer is trying to gain Lindy's favor and fondness? More than likely, there's more to this than just having an obsession with Lindy. I need to know what that is, but the writers will probably keep us guessing for a little while longer.