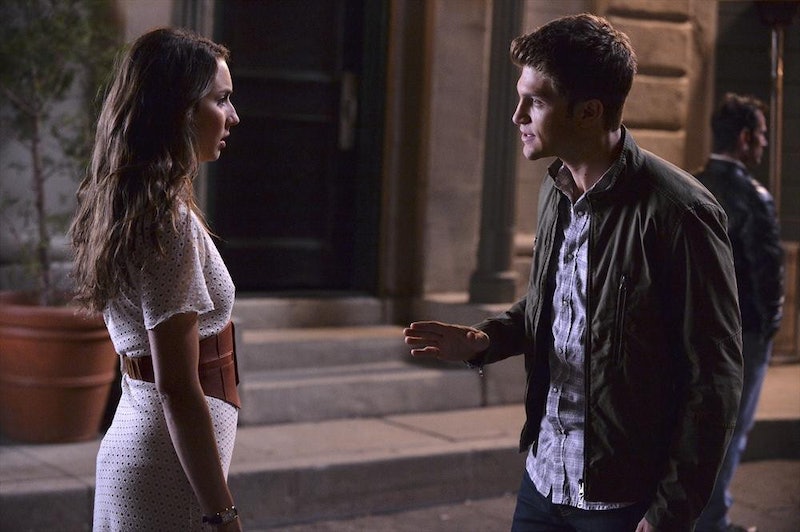 It's never an easy road for relationships on teen dramas, and Pretty Little Liars has enough 'ships sinking and sailing again to make your head spin. One of the longtime fan favorite couples, Spencer and Toby, has has some trouble in Season 5, all stemming from his job in the Rosewood Police Department. What they thought would help them on their search to find and take down "A" has actually backfired, seemingly causing more close calls and casualties in the Liars' relationships than helping anyone get answers.

When I chatted with Keegan Allen (who plays Toby) about what's to come with Spoby, he didn't exactly have good news. With the stress of Toby's job paired with Spencer spending a lot of time accidentally getting into trouble with her barn buddy Jonny, their relationship has been shaky at best, but that doesn't mean it's close to being over.

"I think that with any relationship comes bargaining and compromise. Toby is going through this cop program job that he originally got into to get answers for Spencer ... and there's a huge amount of anxiety constantly nipping at his heels," Allen explains. "That would affect any relationship. And I’m a single guy — I can’t imagine being in a relationship in real life where I’m a police officer from 9 to 5 or longer, protecting my life and serving my community."

Does that mean that Spencer is going to jump into another man's arms? Allen can't say one way or another, but he does understand where the couple is at right now. "What’s going on with Spencer and Johnny is kind of a result of the choices that Toby has made. Toby isn’t a right or wrong character — he’s a choice and result kind of guy. Most of his inner counselor is kind of clouded by his own dilemmas," he says. "You never really know what’s going to happen. I like to assume that true love will prevail, and it’s always fun to watch the show and that dimension."

Longtime loves are central to PLL, with three original couples still together on the show. Allen took the easy way out and didn't name a favorite, but he did cheer for one less canon couple immediately. "I love all of the ‘ships. I really like Emily and whoever she’s with at the time, but I really love the Emily/Alison storyline," he dishes. "I do love Hanna and Caleb and I do love Aria and Ezra, because all of those original love stories they keep going back to and dancing around, there’s something special about them. Fans really enjoy those storylines."

Although he can't give away everything about the upcoming season — though he did reveal a lot about what to expect from the "A" reveal and its aftermath — he has a simple way to answer questions with one EPLL spoiler... in emoji form:

"The only Emoji that can describe everything is the little hand with the OK symbol. You know what I mean? I use that Emoji for everything, so that’s how I would describe anything," Allen reveals with a laugh. "Seriously, do it — any questions that you have, it’s all the OK symbol. Just put the OK hand, because it’s so perfect. Like, ‘Who’s 'A'?’ and it’s the OK hand. Just layer 'em all down the screen." I guess that means that eventually, everything will work out... OK?

In all seriousness, Toby is going through a lot on PLL. He's starting to get a hang of enforcing the law, but in turn has to start questioning his own friends, like Hanna and Caleb. Will he turn to the dark side? When I asked if he'll be the only good cop in Rosewood history, Allen was conflicted. "I think he is a good cop and a good person, but I don’t know," he says. "There was Holbrook and Tanner and they’re all bad, essentially — well, not bad, but there’s something weird about all of them, right? He could end up winning that award of being the only good cop in the history of Rosewood."