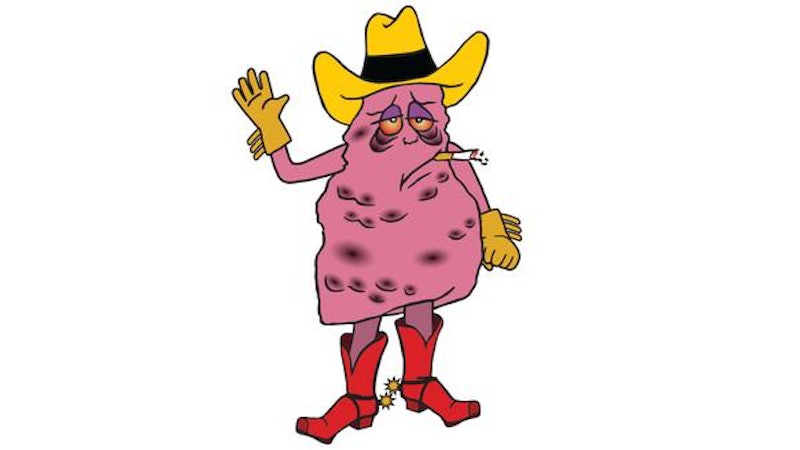 In the last decade and a half, something's been missing. I'm talking about the void left by arguably the most all-American figure in advertisement history — the Marlboro Man. The Marlboro Man was a horse-riding, cattle-lassoing cowboy who just wanted to do an honest day's work, smoke his Marlboros, and stare off into the distance. He was the definition of masculinity and American values. In 1999, the campaign was pulled when the tobacco industry started to curtail its advertisements — but now, Last Week Tonight's John Oliver has come up with a new Marlboro mascot who harkens back to the cigarette's heyday on the ranch. Meet Marlboro's new cowboy, Jeff the Diseased Lung, a gift from Oliver to America.

On his latest episode this past Sunday night, Oliver investigated into Big Tobacco's methods of stamping down health regulations in order to sell their products in other countries. Companies like Philip Morris International (PMI) are consistently able to avoid stronger regulations by threatening to sue entire countries, many of which cannot afford to fight these lawsuits in court.

But all this litigation is totally unnecessary, Oliver suggests. The host understands what each side wants — countries want stronger regulations on cigarettes to protect the health of their citizens and Big Tobacco wants to advertise their products using their preferred branding. Well, there's a perfect solution that satisfies both sides.

Meet Jeff the Diseased Lung in a Cowboy Hat! Sure, he may be an anthropomorphic lung that's decaying from being exposed to years of cigarette smoke, which might not be Big Tobacco's first choice for branding, but he's a cowboy. Look at his regal cowboy hat, his spiffy red cowboy boots, and the way that cigarette nonchalantly dangles from his lips — doesn't Jeff remind you of a figure from days of yore? If you squint, I swear you'll see the Marlboro Man.

As always, Oliver has generously offered Jeff to PMI to use totally free of charge. And he's even helped the tobacco company get a head start with marketing. Oliver and his team sent Jeff the Diseased Lung shirts to Togo and put up Jeff billboards in Uruguay — both countries were threatened with lawsuits by PMI.

So far, PMI has been shy about claiming Jeff for its brand, but the company shouldn't wait too long. With the explosion of Oliver's #JeffWeCan hashtag campaign, Jeff's star is rising, and rising fast. Pretty soon, he might be the first thing that comes up when you search "Marlboro." (Hint: If you post pictures of Jeff in your Google Plus and tag him as Marlboro, that'll push him up in Google's image results.)

So what are you waiting for, Philip Morris?