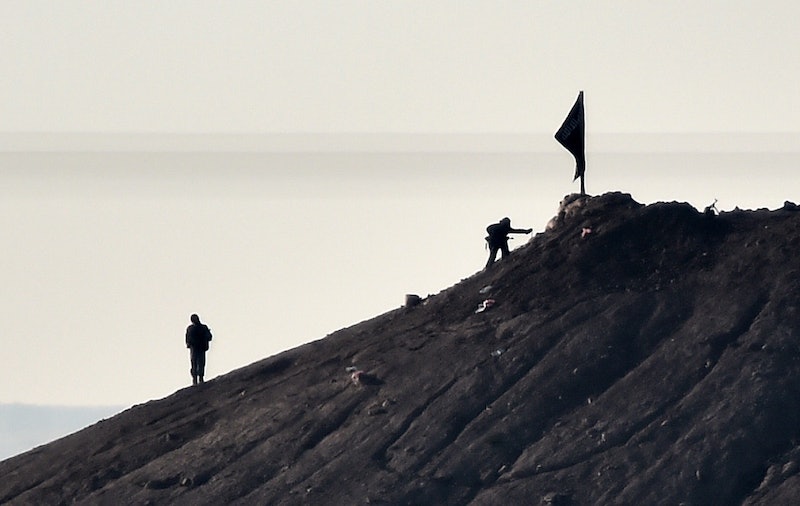 Few concepts have become as much of an American institution as the conspiracy theory. Who shot JFK? Is the federal government secretly setting up concentration camps? What about chemtrails !? All in all, we know how to get whipped up about things over here, even when there are perfectly reasonable, better explanations. But lest we forget, these are human impulses, not just American ones. And sad to say, not even world leaders are immune — here are three ISIS-related conspiracy theories that the President of Sudan might like.

In case you haven't heard, Sudanese president Omar al-Bashir is fond of this sort of thing. He claimed in a recent interview that ISIS, the Islamic militant group that's taken over swaths of Iraq and Syria, killing hundreds of people and leaving the international community vexed, is actually backed by the CIA. Oh, and the Mossad, Israel's foremost intelligence agency. His rationale, as detailed on Euronews? "There is no Muslim who would carry out such acts."

In other words, conspiracy, suspicion, and doubt are looming large in al-Bashir's mind. He's certainly not alone in this, although he might not like the company he's ending up with. Be forewarned, some of these theories get pretty, pretty silly.

Floated in the Iranian press in July on last year, this follows a very similar suit to the U.S./Israel theory advanced by Sudan's president. Basically, the idea is this: the United States, Britain, and Israel have all conspired to create a hub for the world's terrorist extremists, as part of a scheme to... take the heat off of Israel, I guess? It doesn't make a ton of sense.

As Time details, the theory was first reported by the Islamic Republic News Agency (IRNA), an Iranian outlet that has a history of running with bizarre conspiracy theories. IRNA cited an interview with ex-NSA leaker Edward Snowden to back up the claims, but there is no evidence that this interview ever took place, nor is the theory backed up by the documents he released.

Knock knock. Who's there? Why, it's bestselling liberal author Naomi Wolf, and I've got an ISIS-related conspiracy theory to sell you! No doubt, Wolf's embrace of fringe conspiracy theory was a disheartening development for many fans of her work. Wolf's theory, shared by many people on the internet, is that ISIS' execution videos don't look real, but fake, and staged, and maaaaaybe the parents of the victims are actually just actors?

This doesn't actually add up logically, of course. One could make a far easier case that ISIS itself is filming their videos in a staged environment, lending to that artificial quality — in fact, that's a claim that's been discussed and advanced by credible observers.

The Illuminati Did It

Because of course they did. The Illuminati controls damn near everything, so why would ISIS be any different? The above video is a veritable mastery of the YouTube conspiracy theorist form, right down to the digitized voice. Wouldn't want them getting a sample of your natural voice, right?