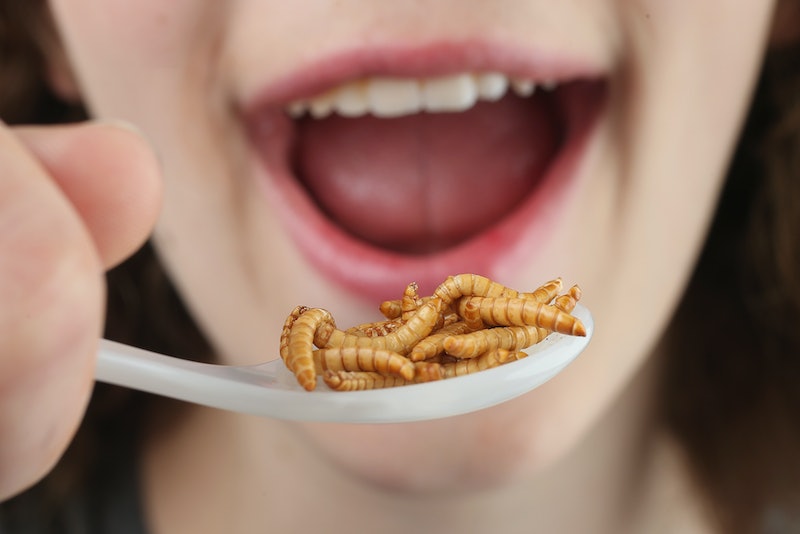 In high school, my art teacher brought two boxes of flavored bugs to class, and I tried the BBQ-flavored larvets. But really that’s nothing compared to Cam Brantley-Rios’ mission to eat bugs three times a day for 30 days. The Auburn University student took on the challenge as a way to show the benefits of entomophagy, the technical term for “eating bugs.” On Brantley-Rios’ blog where he posts updates and pictures of his meals, he also breaks down why he’d like to get more people eating insects.

Not only do bugs provide a good amount of nutrients as other forms of protein (more on that later), but they do so while requiring less resources, including water and land. That’s the big reason behind Brantley-Rios' experiment — he'd ultimately like to reduce the amount of resources that go into the agriculture and farming industry. According to the USDA, 80 percent of the USA’s water consumption goes to agriculture. National Geographic states that about 40 percent of the Earth’s land is used for agriculture. That water and land goes into providing enough food and hydration for animals such as cows. Brantley-Rios claims that bugs, by contrast, don’t require nearly as much water and land. If we increased our consumption of them, it would help with water and land preservation.

That would be great, if more people were on board with eating insects. Brantley-Rios thinks that hesitation about eating bugs is similar to the ones people had about eating raw fish in the form sushi in the '70s. The idea seemed ludicrous to Americans then, but look at us now. If that angle doesn’t work to convince people to add a bug or two to their meals, maybe a few more facts about eating insects will.

1. Insects Are Full of Nutrients

Crickets contain about 21 grams of protein per 100 grams, compared to 26 grams per 100 grams in beef. According to Brantley-Rios, mealworm contains about 24 grams per 100 grams and a waxworm contains about 14 grams. According to Justine Alford on IFL Science, “mealworms contain as much unsaturated omega-3 and omega-6 fatty acids as fish and even more than beef and pork.” Some insects are also high in iron. Fats that can help with high cholesterol and high blood pressure.

2. The Taste Depends on How You Cook Them

Speaking from my experience as a totally awesome and interesting person who once ate larvets once, it didn't taste that bad. In fact, it was BBQ flavored, so it actually tasted pretty good. Insects, just like other forms of protein, can be cooked and flavored. Texture is another matter. But, maybe avoid silkworm pupae.

Because it's pretty unavoidable, the FDA allows small amounts of insects (body parts and whole insects) in food. Nothing big, just a maggot here and and an insect head or two there. They're just a part of the food cycle, so what harm could a few more insects do?