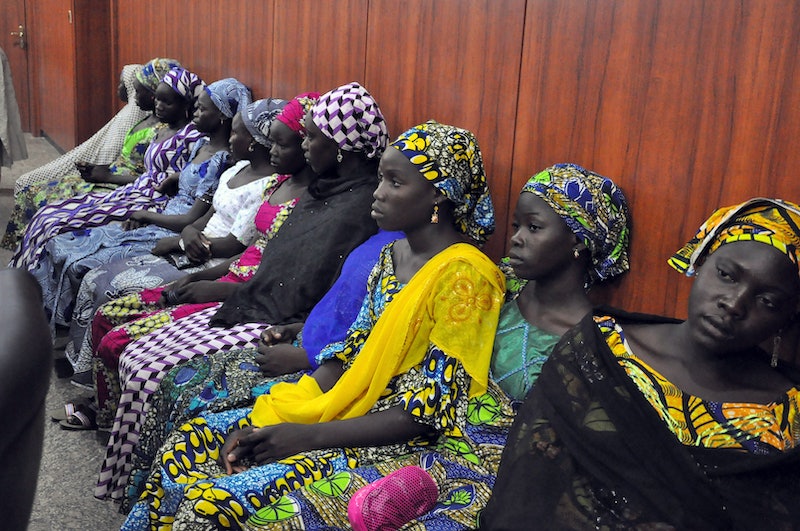 For the girls who escaped Boko Haram last April after more than 300 girls were abducted from a school in northeastern Nigeria, returning to school is incredibly dangerous. Two sisters, Asabe and Ruth, who jumped off the Islamist militant group's truck full of their frightened classmates to avoid the fate of the 219 girls still in captivity, are now returning to school with scholarships raised by the #EducateOurGirls campaign.

Asabe, Ruth, and the other girls who also escaped are taking a major risk by going back to school. Boko Haram, which promotes a version of Islam that forbids any activity associated with Western society, including secular education, now controls about 20,000 square feet of Nigeria and continues to target schoolchildren. Pursuing an education is a defiant statement against Boko Haram.

The sisters were approached about the scholarship by Godiya, a 27-year-old woman whose sister had also been abducted. Godiya was traveling through Boko Haram territory trying to find previously kidnapped girls who would accept a scholarship. Months before, Godiya told her boss at the American University of Nigeria in Yola that her sister had escaped Boko Haram and, with the other escapees, had nothing to do. Her boss, Margee Ensign, set up the American University of Nigeria Foundation and the #EducateOurGirls campaign, which raised $50,000 to put 10 girls through university for a year.

When Godiya showed up at Asabe and Ruth's house, she only had one scholarship left and the girls' father didn't want to choose which daughter should get an education. Back in Yola, Ensign heard about the family's dilemma and called to tell the father that they would raise enough money to send both daughters back to school.

Despite the risks, the bravery of the girls who accepted scholarships and their families are already inspiring others. Ensign told The Guardian, "Ten more parents just sort of showed up at our gate and asked us to take their daughters. But after 21, we had to stop because that's a big commitment." The girls are already excelling at the American University of Nigeria.

Feb. 7 marked 300 days since Boko Haram kidnapped hundreds of schoolgirls and 219 have yet to be found. Many have reportedly been sold into slavery and early marriages to Boko Haram militants for as little as $12. Nobel Prize winner Malala Yousafzai continues to urge Nigerian and international political leaders to push for the return of the kidnapped girls, drawing on the original #BringBackOurGirls campaign.