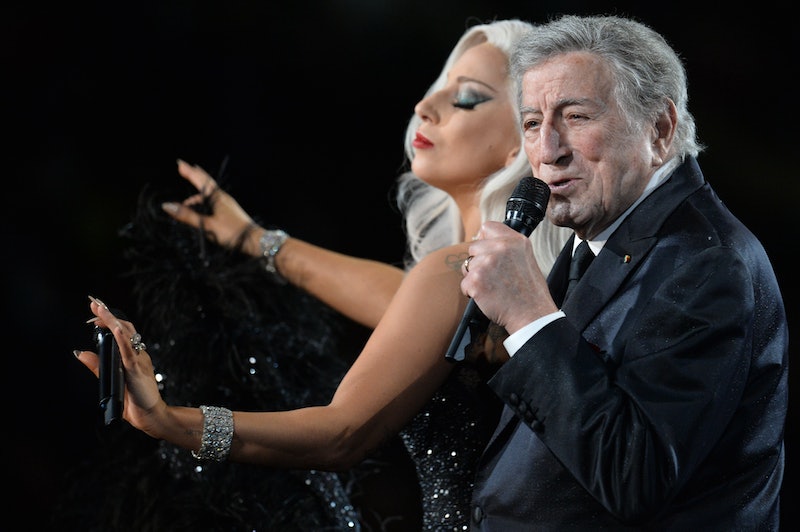 If Lady Gaga read her horoscope for February, she was probably ready for ALL of the awesome things to happen once Mercury stopped being in retrograde. On Valentine's Day, she got engaged, and on Sunday, Feb. 22 she'll be performing at The 87th Annual Academy Awards. That's a pretty good week, all things considered. This begs the question: who will Lady Gaga's Oscars date be, smoldering fiancé Taylor Kinney or best musical friend Tony Bennett? I'm sure she'll have fun either way, but let's try to tease out this question just for giggles.

We know that Gaga will give a "special tribute performance" at this year's Oscars ceremony, and it's kind of a big deal. This is the first time that Gaga has performed at the award ceremony, and she doesn't sing any of the songs affiliated with the nominated films.

Let's backtrack though. What exactly will this "tribute performance" entail? Will she do a medley of the winners of "Best Original Song" from every year of the awards? Will she just go old-school-bananas Gaga and sing "Edge of Glory" in a hovercraft dress? Or maybe she'll bust out some of the numbers from Cheek to Cheek alongside her collaborator Tony Bennett. Ya know, like she did at the Grammys.

In that event, I would imagine that she may bring along her buddy Tony and repeat history from two weeks ago.

Then again, if Bennett were performing with Gaga, I feel like that would've been announced already. Hence, it seems like she would probably want to keep the romance train rolling, and bring along her new fiancé.

After all, she enjoys bringing him along to various events.

And considering that he didn't come to last year's Oscars with her...

I'm sure he'd be totally jazzed to be there! Plus, it would be a great place for them to debut as a soon-to-be married couple!

That's why I'm putting my money on Gaga taking Kinney as her Oscars plus-one. Sorry, Tony. No hard feelings.