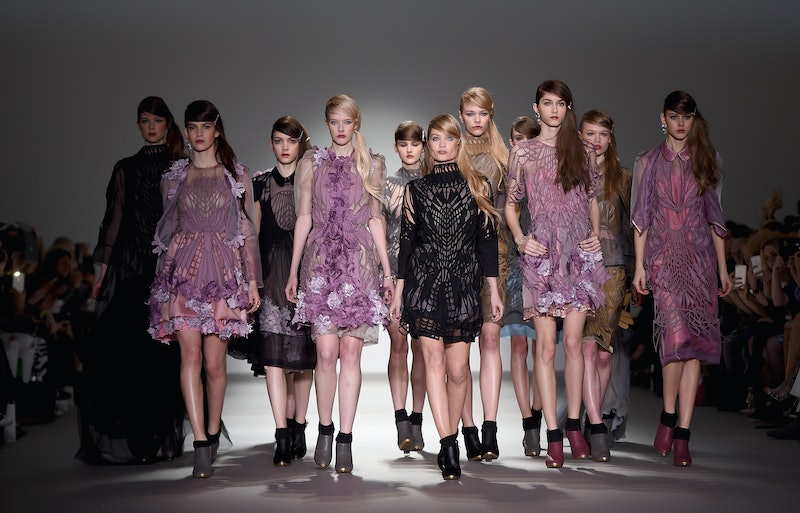 Another fashion week has come and gone flawlessly. Fashion week is huge. It's a big deal —well, maybe not as big as it used to be, but it still brings many fashion lovers and fashion consumers to New York. But, like Gretchen Wiener's hair, New York fashion week is so big because it's full of secrets. For example, do you know how much a fashion week show costs? Or that there's a very specific seating chart?

Like any good award show, NYFW is well-scheduled, weeklong event. It runs smoothly according to that schedule because of these secrets, carefully hidden behind couture dresses and ready-to-wear bejeweled pants. There are reasons why normore gets a bit crazier during fashion week, why Anna Wintour always keeps her sunglasses on during the shows, and how certain "special" people get to sit in the first row.

Consuming fashion week outside of NYC means refreshing Style.com or your favorite magazine websites umpteen times a day. And even then, you might miss some of your favorite moments. Let's not lose focus, fashion week is great. It's an artistic representation of items we could use to define or express ourselves. But for those times your invitation to fashion week is lost, hopefully this will provide you an insider's look into the event.

1. Location Is Key — Well, Except For This Year

In past years, there was a central location for fashion week. A majority of designers, especially the big names, would hold their shows at Lincoln Center. Some designers would opt to host their shows off-base, but never as many as did it this year. Citing damages to the building, Lincoln Center reportedly "booted" fashion week from renewing its contract with the site, even though it was supposed to host the event until 2020. The Center was gracious enough to allow one last season to happen in its hallowed halls, but come Spring/Summer 2016, designers are gonna have to find a new place to call home.

2. You Can't Buy Tickets To NYFW

OK, well, this is kinda true. If you have any sort of press connection (yep, personal blogs count), you can buy tickets through Mercedes Benz to give you general access to Lincoln Center. From there, you'll probably be able to get standing room access into the majority of shows. However, to actually sit at Fashion Week, you have to be cordially invited to the event by a designers.

Seats are not just first come, first serve at fashion week. Each designer has a strict seating chart to their shows. It's why Ms. Anna Wintour will always get the front seat and why the prime minister of Malaysia was definitely going to sit at the end of the runway in Zoolander. But there IS hope for us normals! Designers want those front rows filled (it looks better in photos), so if some fashion big-wig skips out on a show, the publicists will bump randos in standing room up to the front.

4. Celebrities Get Paid To Be At Fashion Shows

Celebrities aren't merely paid to be at the show, typically in the front row, watching beautiful clothes walk down the runway (life goals). Their whole travel, lodging, car services, and meals are generally paid for by the designer. The price is determined by how famous a certain individual is, how often their photos get used in front row roundups, and if they want a celeb associated with their brand. Hayley Phelan at Fashionista reported this trend is declining, however, because of budgets are down, which means more great news for us normals.

Mercury is done being in retrograde, so we can't blame that for the risky, yet amazing street style fashion choices we've seen on the streets the past week. One part of fashion week that isn't dying: Using it as an excuse to finally wear the craziest impulse buys that have been sitting in your closet. Fashion bloggers and editors alike have stated they dress just for the on-the-go photo ops, and it's honestly amazing how many people without show invites will just stand outside Lincoln Center for hours waiting to be photographed. Can't hate the hustle.

6. Celebrities Outfits Are Often Picked For Them

This is actually a secret I picked up from watching The Hills, specifically when Lauren is sent from LA to NY overnight to pick up a dress from Marc Jacobs and is worried she might "have to" attend his show. She doesn't know what to wear. With the help of Whitney Port, Lauren learns its proper etiquette to wear pieces made by that designer to the show. Designers will usually loan (or gift, if you're really lucky) pieces from their past collections to celebrities who've said they'll attend.

When the Lincoln Center was the home base, E! News reporter Alicia Quarles revealed that models, beauty editors, and security guards were forced to use port-a-potties. Although Quarles said she never saw Wintour using the potties, nobody was able to avoid them.

Quarles actually had the opportunity to walk in the Go Red For Women Heart Truth Red Dress Fashion Show in a Zac Posen dress last season. While she loved the opportunity, Quarles told E! that she did not walk away un-scathed. After the show, she found three bruises — one from the dress! She also gashed her finger on the ring she was styled in and found a mysterious cut on her toe. She's not alone, even supermodels can't leave the runway without a mark.

After A/W Fashion Week last year, Business Insider uncovered how much one typical show could cost at fashion week. Between recruiting, publicists, hair and makeup, venues, etc. Business Insider came up with $460,000, estimating everything at their most expensive prices.

10. The Gift Bags Are As Awesome As They Sound (Usually)

As if watching the show was not enough, it's not uncommon for designers to leave little gift bags on the front row seats at their show. Usually, these come from brand sponsors who want to get their names out, and can range from a water bottle and some crackers to a brand new curling iron to accessories from the designer. Sweet.