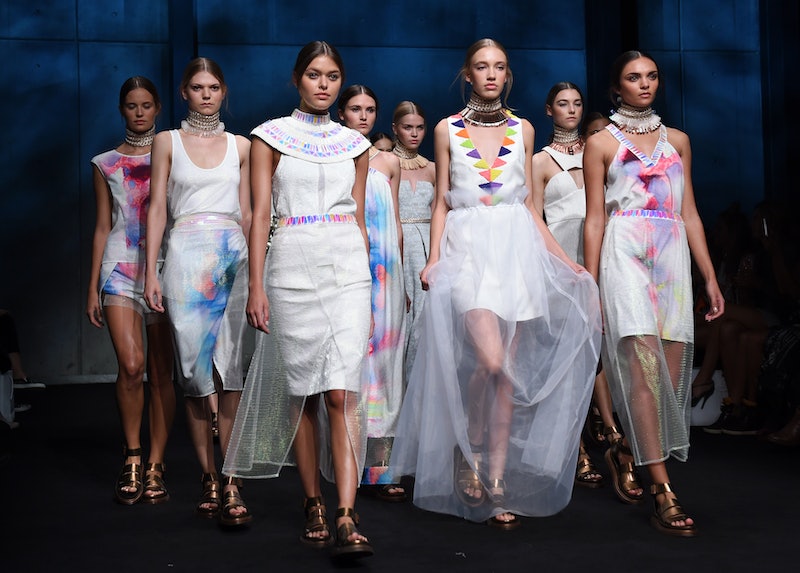 Fashion week is upon us, and New Yorkers are in the midst of dividing into two camps: Fashion Week followers and Fashion Week abstainers. At first glance, Fashion Week appears to be a ceaseless stream of well-dressed aesthetes, bloggers, models, and editors who live and breathe fashion in all of its forms. However, it's easy to miss the fundamental values that lie underneath the pomp and circumstance when the veneer of beauty seems to be all that matters. In reality, the aesthetic aspects of Fashion Week do matter greatly, but the week is a chance for designers and creatives to express cultural and political imperatives as well, without rocking the boat. Even if the thought of shopping nauseates you, and the notion of attending events which seem to highlight surface values is abhorrent, you should pay attention to the events which transpire. You may find that you learn more about your world while watching one fashion show than you do by devoting an hour to CNN.

To begin with, Fashion Week is one highly-regarded convocation of some of the world's visionaries which is actually female-dominated, and female-devoted. From the catwalks to the streets, women are the focal point of Fashion Week, and so they should be. With so many industries from film to finance dominated by men, it is not only refreshing but essential that women take the lead on Fashion Week. Industry leaders including designer and businesswoman Diane von Furstenberg and Vogue Editor-In-Chief Anna Wintour are paragons of female intelligence and authority, encouraging future generations like the hordes of self-starter bloggers and new designers to bring their plans to fruition.

The runways themselves have even rung with the battle cries of women breaking the glass ceiling, as designers like Karl Lagerfeld utilize the forum to make a statement about gender equality and women's rights. Forbes' 30 Under 30 designer Carrie Hammer likewise creates custom confections for career-driven women who wish to convey their acumen and capability through their clothing as well as their work. A woman who wishes to empower herself may find more to relate to at Fashion Week than meets the eye, whether she's searching for role models or a business model.

If Fashion Week's feminist leanings don't appeal to you, perhaps its political aspects will. The week's most enterprising designers often find methods of weaving political viewpoints into their collections. Betsy Johnson declared her unfaltering support of same sex marriage with her bridal-themed Spring/Summer 2015 collection, while dissident designer Vivienne Westwood said "Yes" to Scottish independence with pins adorning models who walked in her Spring 2015 Red Label show in September of 2014. And of course there are the occasional gate-crashers, who storm the runways hoping to broadcast their message to each show's millions of viewers, as did several Femen demonstrators who hopped atop the Nina Ricci runway in September 2013.

However, fashion is essentially an artistic representation of both cultural movements and personal preference. With marijuana becoming legalized in a number of states and hookup culture resembling the Free Love movement, it's no wonder the '60s and '70s are in heavy dosage on the Fashion Week runways and off. And the military trend which comes and goes every few seasons? You would be mistaken if you think it has absolutely nothing to do with the presence of violence around the world during any given year. Paris Couture Fashion Week, for all its idiosyncratic and bizarre designs, demonstrated that a post-attack Paris is standing strong and surmounting what has been a horrific time with incredible resilience and grace.

So the next time your sartorially-obsessed friend excitedly squeals about a Fashion Week update, take a beat before dismissively telling her the week is nothing more than clothes and shoes. Fashion Week is so much more than a beautiful gown or designer debut; it expresses the current state and aspirations of our society.