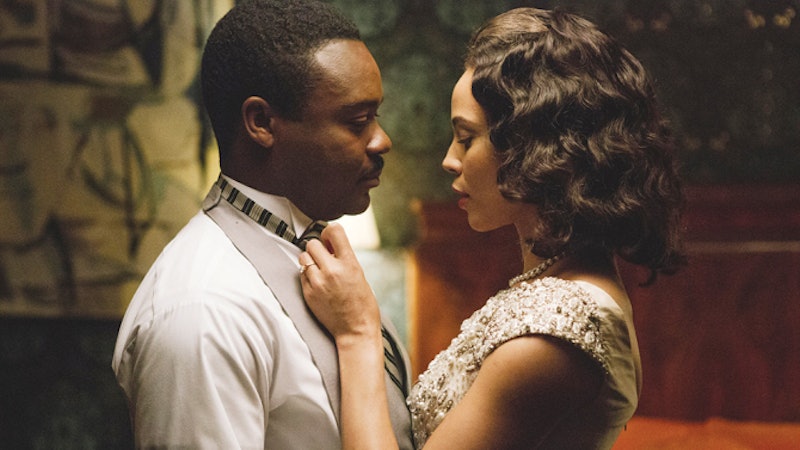 To play an icon on screen comes with a great deal of responsibility. Not only is this person beloved by many, but he or she isn't based in fiction. A poor or inaccurate depiction could land the actor in hot water. But luckily for Carmen Ejogo, who co-stars in 2014's Selma , it wasn't her first time taking on Coretta Scott King. She played the icon once before, in 2001's Boycott, when Coretta herself was still alive. " I was excited by the idea of playing the same character twice at different times in her life. I can't really think of any actor who's had the chance to do that on film," Ejogo says.

And while she's able to revisit the real life character again, Ejogo wasn't always familiar with the Kings or their place in American history books. "My experience of the Kings began most concretely when I got to play Coretta the first time. But being British, I wasn't raised with a deep understanding of their legacy. Even having played her once before, I wasn't that familiar with the Selma to Montgomery march. So I had to revisit the history book to get myself up to scratch on the time period."

And the Coretta she portrayed for Selma was in every way different than the woman she portrayed previously. "I had the chance to meet her many years ago, so I recall a lot of that experience in this performance. Very different energy than the Coretta I played previously. When I first portrayed it her it was 1955 during the Montgomery bus boycott. She's a younger, somewhat more naive Coretta," she says. "When I played her in Selma she had become a much more wearier figure. There was more frustration in her regarding the relationship, her marriage. She was mostly at home with the kids, which is not a job that she didn't value, but I think there's so much more to this woman that didn't get expressed."

Wanting to craft a performance as true to the late Scott King as possible, Ejogo drew from many materials to inform her performance. "I used photographs in a way I hadn't used before," she says. "One of the greatest finds when you're portraying someone that is quite enigmatic, is trying to capture moments where they're caught off guard or don't realize they're being photographed."

Research proved to pull up many iconic images of Coretta — Life magazine covers, Coretta at Martin's funeral, Ebony magazine covers — but few unexpected shots. "There isn't a lot of those photos of Coretta, but the few that I found were very helpful," Ejogo says. "She's very self-conscious about smiling too much. She might smile a little, but it's a very self-concious smile. She might be known as a woman who didn't smile much, or didn't have a sense of humor, but you digger and find the much more personal imagery, and you find that she was clearly someone who had an enormous sense of humor. So in that regard, it was very helpful to find layers to a woman who was very self-protective."

Selma is in theatres now.