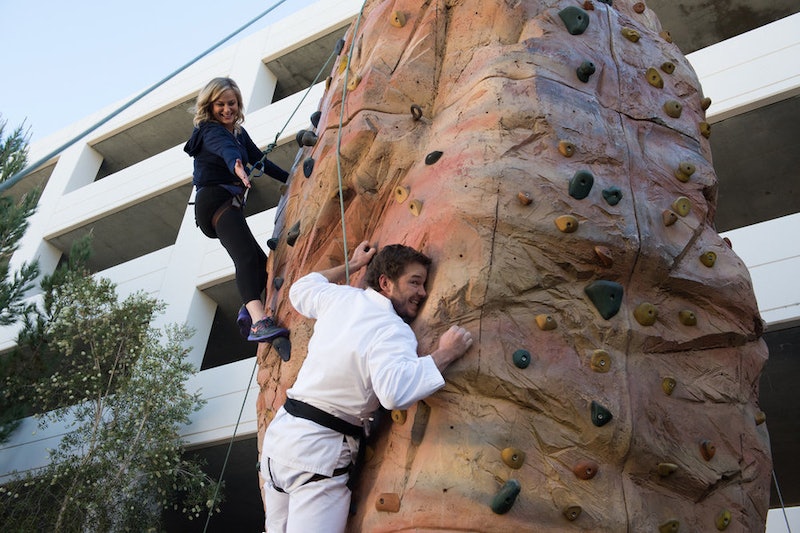 I know Parks and Rec is coming to a close, but if they're going to pull a stunt like this from now until the finale, I don't think I'll make it to the final episode without being a quivering, sobbing mess surrounded by a pile of tissues. On Tuesday's first episode, Parks and Rec said goodbye to Johnny Karate , Andy Dwyer's children's television show, and heyooo, it was not an easy pill to swallow. I hope if I make this sound sad enough, someone at Parks and Rec will see it and start up production and call the entire cast and crew to keep producing new shows. But because I'm a relatively pragmatic person, I know that probably won't happen, so let the grieving begin, because Johnny Karate is a wrap.

We were treated with a real episode of Johnny Karate on Tuesday, and it was the perfect send-off before April and Andy embark on a new life in D.C. The episode brought back a ton of old friends of Andy's; he was made a cop (maybe? Not officially?), he was knighted by Eddie (the British guy from the London episodes that took to Andy in a heartbeat), he was even serenaded by Donna and Duke Silver with a smooth jazz version of "Kung Fu Fighting," that might have left me gently weeping. The entire situation was beautiful.

And just when you didn't think it could get more emotional — seriously, how am I going to handle the series finale, if I can't handle the series finale of a show within a show? — Andy and April proved why they're the ultimate #RelationshipGoals for us all. Andy's final task before closing the show was to be nice to someone, which is when he turned to his wife: April Ludgate Karate Dwyer.

April got emotional — APRIL. EMOTIONAL. — and ran away from the situation. Andy chased after her in the only "real life" scene the episode provided, where April confessed that she feels guilty that she is taking him away from the thing he loves. But he loves you, April! Andy went on to say that she was what he loves, and said, "You're what keeps me going." I repeat, #RelationshipGoals.

With the Johnny Karate chapter closed on Parks and Rec, we can pretty much be assured that the rest of the episodes will leave us nostalgic about all of the amazing moments the show has given us over seven seasons.