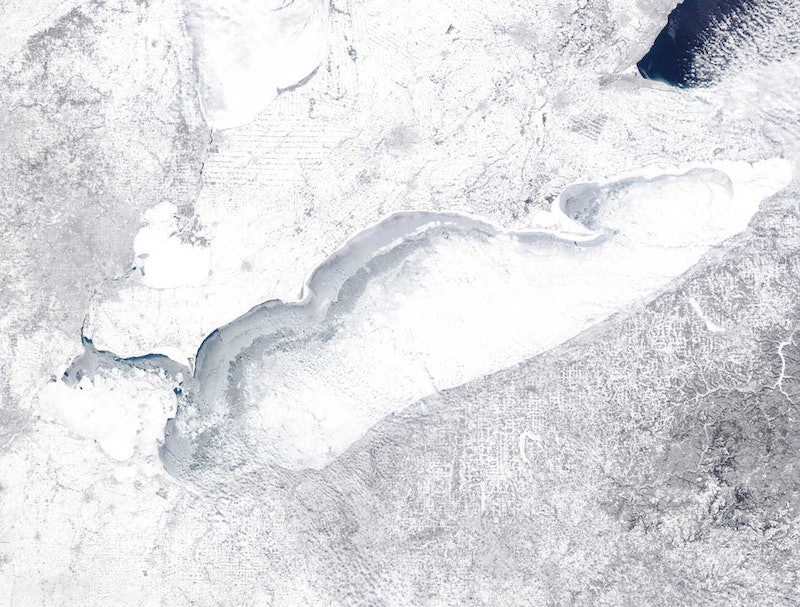 OK, East Coasters, we know. You're sick of hearing about snow and cold and how the winter of 2015 is never, ever going to end. New York City, we know, you're never going to feel warm again. And poor Boston, we'll see you in May when you finally dig out from all that snow.

Sometimes, though, when you're in the middle of a season, you might think it's the hottest/coldest/snowiest/worst ever, even though you're not totally sure how bad it actually is compared to a normal winter. Well, a little empirical evidence that this winter is one of the coldest on record: Lake Erie is nearly 100 percent frozen over. That's Lake Erie, the fourth-largest of the Great Lakes, at 62 feet deep and 57 miles wide. It's massive, and it is close to being completely covered with ice. This has only happened three times in recorded history, according to the National Oceanic and Atmospheric Administration, most recently in the winter of 2009-10.

So, how does this year compare to some other extreme winters? The winter of 2009-10 was pretty bad, according to Accuweather.com. Several major cities in the Northeast broke previous snowfall records that winter, and two huge storms in February 2010 hit within just a few days of each other. At one point, all of the continental U.S. had some snow on the ground, and yes, that included Florida. Most states east of the Mississippi had constantly below normal cold temperatures from December through February, Accuweather reported.

Before 2009-10, the last time Lake Erie froze over was 1995-96, which was also a brutal winter, according to NOAA. A cold snap near the end of January 1996 saw below-normal temperatures throughout most of the country. A massive blizzard the first week of January impacted the entire eastern part of the country, shutting down airports along the eastern seaboard, setting records for snowfall in Philadelphia and parts of New Jersey.

Is there any good news on the horizon, any lessons to be learned from these previous winters where Lake Erie froze? It sort of depends how you like your summers. According to NOAA, the summer of 2010 was one of the hottest on record. But the summer of 1996 was rainy, and unseasonably cool.

One thing we were able to confirm: Previous years with brutal winters and record snowfall and cold temperatures did eventually end, and spring and summer did arrive. It doesn't feel that way now, but look at it this way: the first day of spring is just over a month away. And summer's not that far off.