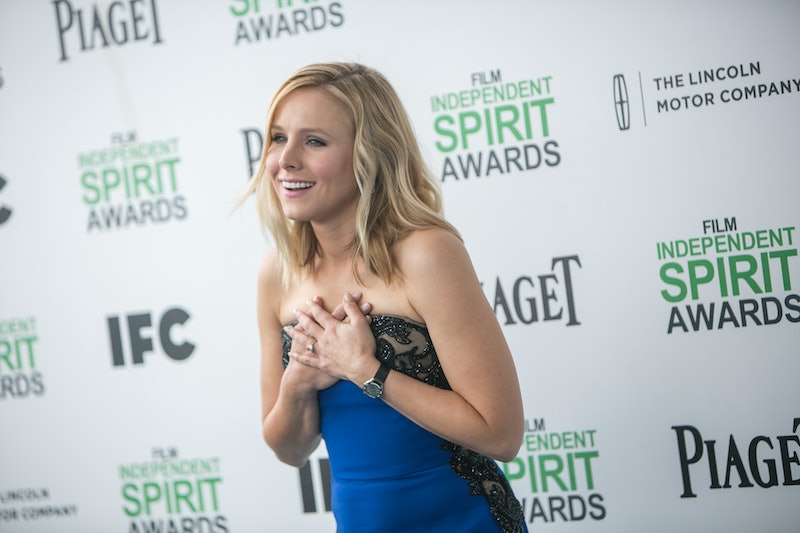 Kristen Bell is tireless. Seriously. She is raising two young daughters and cherishing that time at home, but she sees her work schedule and career taking off again as the summer approaches. Bell is hosting the Independent Spirit Awards on February 21 and she has one hilarious, irrational fear about co-hosting with Fred Armisen. "Provided Fred doesn't need to breastfeed off me, I guess it will be a nice change of pace!"

In addition to hinting about the status of Frozen 2 , Bell tells me, "I have taken a little bit of time off to spend with my girls. I am going back to work in a couple weeks. I am hosting the Independent Spirit Awards. It's obviously not a full-time job by any means. It takes about a week. But it will fun, it will get me back out there."

But about her summer, the 34-year-old actress continues: "I don't have any reason to think that House of Lies won't be back in the fall. I will play summer by ear, as far as working as an actress goes. If I have a wonderful time, I might stay home and enjoy my kids being toddlers."

Bell has worked enough in her life to write her own ticket and it sounds like she is enjoying choosing her projects carefully. Hosting awards shows appears to be her recent thing, though, as she held her own with surly country star Jason Aldean when hosting the CMTs in 2014. She digs these gigs and would love to continue to do them.

But what would she think if hosting award shows became her niche? "I wouldn't hate if it I was. I would certainly be among delicious company. Two of the best of the best in this business, Amy [Poehler] and Tina [Fey], do it so often. I would not hate to be even mildly associated with same things that they do."

"I also have a lot of fun hosting. I like to talk. I can read a teleprompter fairly accurately. It is a fun gig. Surprisingly, here is the secret: It's easier than you think. I don't write the entire show from top to bottom but I have a blast doing it. I would not stop hosting things in the future, provided that I am invited."

Something tells me her invitations will continue to roll in.