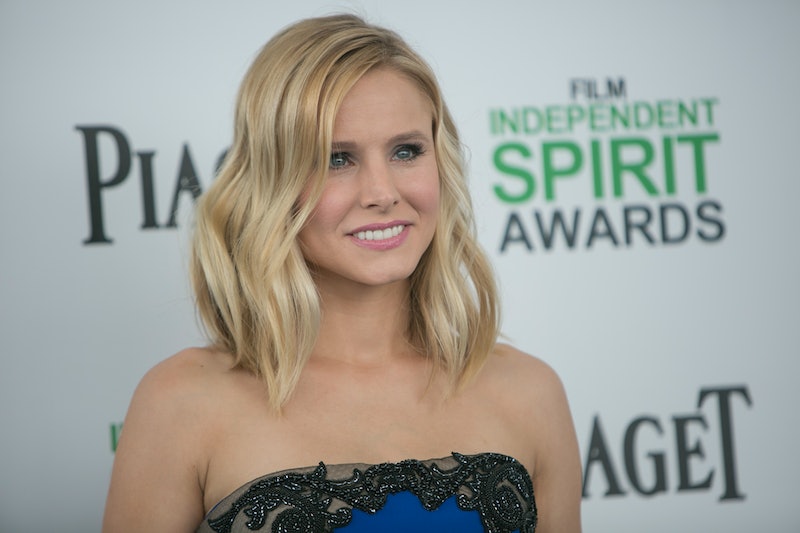 Kristen Bell is a busy lady, as the mom of two daughters, the star of a TV show, and an awards show host. In addition to all that, she's also a philanthropist, having partnered with a friend for their This Bar Saves Lives initiative, which provides things like nutrition and malaria treatments to those in need. Kristen Bell's new charitable endeavor is This Bag Saves Lives, a reusable, recyclable, and adorable tote (a premium necessity in L.A. since the plastic bag ban). It's stylish and a not so in-your-face way to do a little good. I spoke to Bell about her do-gooder efforts and about possible future fashion forays with a give back element.

Bell admitted that becoming a mom kickstarted her interest in using her fame as a platform to help others. "The company was founded around the same time I got pregnant," she noted. "Whether it was my eyes were open wider or my mommy hormones kicked in or I stopped being as selfish as I was in my 20s, whatever the reason, I became aware that children around the world have needs that were not being met."

She continued, "Not to say that I wasn't aware of it before. But it started to really affect me... When looking at some of the statistics, it was terrifying."

So, how did the adorable and roomy red-striped bag come into play? Well, it was always something she wanted to do. It just took a minute, since she wanted to do it right. Now, the bag helps provide malaria medication to someone in need.

"We wanted to do the bag a lot sooner," she revealed. "What we learned was that when creating a product, do it responsibly and ethically. That takes a long time. The ban on plastic bags in L.A. was last June. The idea came well before that but it was set it into motion."

Since Bell loves stripes, those factored into the design.

Good news if you're smitten: Bell does plan to offer other accessories in addition the bag in the future.

"I am thinking very far ahead," she said. "We are currently focusing on both the give back element and the product that we are selling as being a little more in the necessity category, which is food. The bag is not a necessity, but you need it to carry stuff. I am trying to strategize on the want of the American consumer. I buy things that I want, not just what I need. I have fun doing it. I'd love if there was the give back aspect to a necklace that I purchased or a fedora or a sweater that I found. It is going to take a while to develop those. They will definitely be in development, if I say anything about it. I would like an entire line of… this."