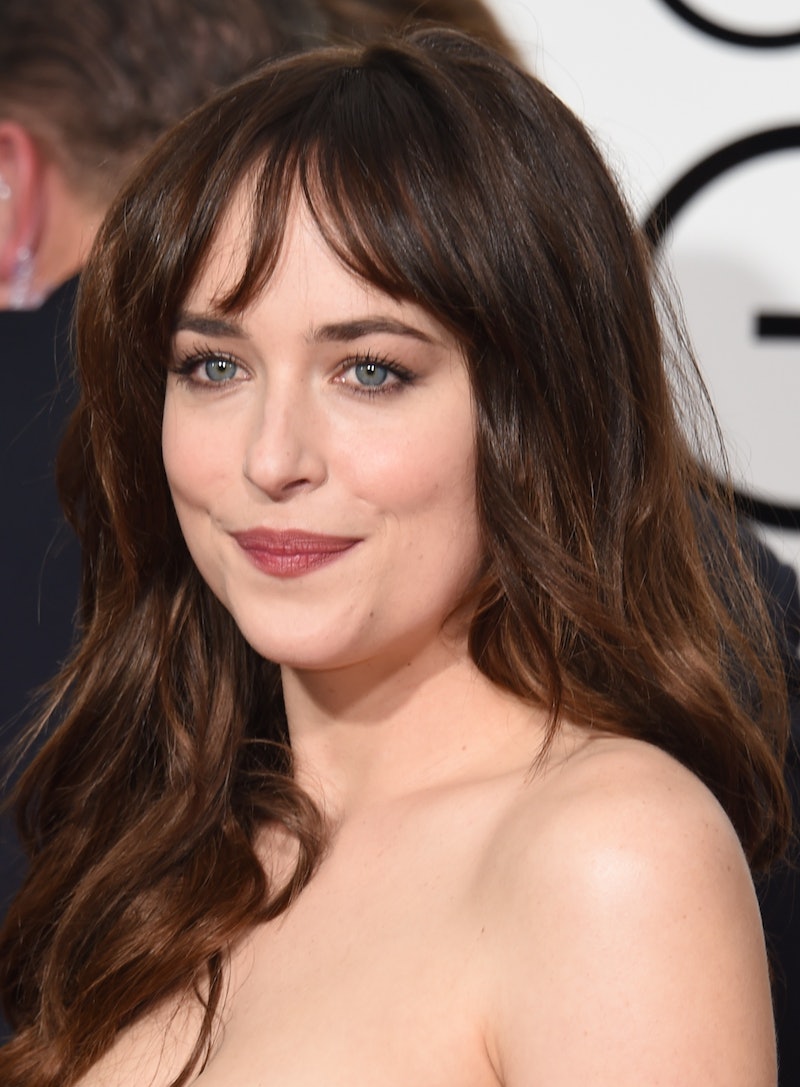 It's natural that, after spending so long on a TV show or movie, for actors to get a little attached. That's why it often happens that, to commemorate their time on a project, they end up taking souvenirs home from the set to remember it by. The latest star to join this trend is Dakota Johnson, who stole quite a few things from the Fifty Shades of Grey set — and every single one of them are as naughty as you'd think.

The Ana Steele actress made off with "lots of the underwear" because "they were comfortable." But she also took one of the kinkier objects home. Don't get too excited, though, because she hasn't been using it. "I do have a flogger in my house. It's in the garage with dust," she told E! News.

But Johnson is far from the only person to steal something from the set of a movie. Although some stars are gifted props at the end of filming, many still just take things home even without permission. Because really, what kind of trouble are they going to get into? Without them, there would be no movie to steal props from anyway.

Here are 13 other movies and television shows whose sets were plundered by the cast upon the end of filming.

The actors on this hit show revealed to Entertainment Weekly that they stole a lot from the set after the finale. Well, everyone except for Bob Odenkirk, because all his Saul Goodman stuff was needed for the spinoff. But Bryan Cranston revealed that he is the rightful owner of Heisenberg's unofficial costume of a hat and sunglasses. And Aaron Paul wanted a meaningful prop as well, hence why creator Vince Gilligan gave him the burnt pink bear.

I really wanted something that symbolized Jesse in a way, and I know that might be kind of a long shot, but I think that pink teddy bear really symbolized the relationship between Jesse and Jane. It wouldn’t have landed in Walt’s pool if it weren’t for Jane’s father.

But the show's two lead actors aren't the only ones who walked home with set props. Dean Norris took home Tuco's grill — which is fitting considering it was also Hank's own little souvenir too. And Betsy Brandt stayed true to Marie's shoplifting nature by not asking permission to take what she swiped. "I didn’t even ask permission for it, I just flat-out stole the tchotchke that Marie took in 'Open House.' It’s this little boy riding a little pig or something. It’s a weird thing, but I just had to have it," she revealed. "It just didn’t feel right [to ask permission], so I lifted it."

Anna Paquin revealed that she took nearly all of Sookie's costumes home with her after True Blood wrapped. This pleased co-star and husband Stephen Moyer who said, "Tell me you took a little Merlotte's short apron, cause I like that. They're saucy." Don't worry, she did.

The blue french horn lives on in Josh Radnor's house, which is very fitting for the actor who played lovesick Ted Mosby. "I had one request and [creators] Carter and Craig very kindly gave it to me," Radnor said. "I asked for the blue French horn and I got the blue French horn."

I'm glad it still exists somewhere even if it did symbolize one of the worst television finales ever.

The stars of The Hobbit franchise were asked what they took from the set upon the conclusion of the final film. Martin Freeman adorably answered "friendships," because he's the cutest. But his co-stars took some more material items. Richard Armitage took a map, Lee Pace took his sword, Evangeline Lilly snuck a moon rune stone, and Luke Evans took some dwarvish coins.

Daniel Radcliffe didn't take his wand, but he did want two props that held some symbolism. "I got two pairs of glasses, one from the 1st [film] and one from the last, and I'm very happy and they're both in prided place," he said, which makes me really emotional for some reason. Like, look how much he's grown up, and Harry Potter is over, and now I'm borderline crying, sorry.

Emma Watson also snuck home some Hogwarts objects, taking her wand, cloak, and time turner. Because what is Hermione without her ability to fit too many classes in her schedule? And Rupert Grint got to keep the deluminator, which is adorable considering Dumbledore gave it to Ron, just like the prop team gave it to Rupert. Definitely crying now.

Mockingjay — Part 2 isn't out yet, but filming has wrapped on the series and the actors didn't leave empty handed. Josh Hutcherson, who plays Peeta, revealed that he took a Catching Fire object home.

I actually took the pendant that I gave Katniss—the one that opens and has the picture of her family, from that scene on the beach. I took that. It’s my one memento. It’s in my house in my desk drawer. I’m going to try to purposefully lose it—but in a way that I know I will find it in the future.

Jennifer Lawrence took some Katniss props too, revealing that she kept, "my hunting jackets, the leather one, and my boots. And after the last scene, I intend to keep the bow. I think I’ve earned it." Indeed she has.

Robert Downey Jr. is the proud owner of the giant 'A' on Stark Tower, because when he asks for something, it gets delivered.

On the last Avengers, there’s this scene where there’s this ‘A’ which is probably 30 feet tall, and I’m looking at it, and we’re shooting in England, and I go, "I need that in my office in Venice." About two weeks ago, a wheeler showed up, I’m like, "What the heck is this doing here?" And they go, "This is the ‘A’ you asked for." And I go, "They brought it?" So now we have a massive Avengers ‘A’ that will be prominently placed.

Tom Hiddleston has a knack for making off with his characters' scarves. He took his Loki one from the first Thor movie, but it's a habit of his that stretches back to his 2010 film Archipelago — where he took his character Edward's scarf.

Mark Wahlberg says he's only taken home one prop in his life, and it was from the 1997 film Boogie Nights. In it, he plays a porn star, and, as a result, had a prosthetic penis on set. That's what he ended up keeping when the filming wrapped. "You have this weird guy putting it on you. You have to wear it all day. There's not a way to go to the bathroom or anything like that. It was pretty weird," he said of the process of attaching the penis. "But it's actually the only prop I've ever kept from a movie."

Olivia Wilde said she used to take the show's medical equipment to play with at home, and so did everyone else. "I used to take home the stethoscopes because they look cool and a fun to play with but we don’t seem to have them anymore," the actress said. "I think they all got stolen so it wasn’t just me.”

Andrew Garfield may be out of the movies now, but he can always remember the good times he had by looking at the prop he made off with: his suit. Now that's one cool costume to get to keep.

Michael C. Hall didn't keep any of those blood slides (that's just creepy), but he did keep the nine-foot railing from his apartment porch. Priorities, you know.

Kristen Stewart kept Bella's engagement ring, saying it was "really important" to her. But her co-star Robert Pattinson got perhaps the best thing of all. When asked if he took anything from the set after filming was over, RPatz simply said, "my dignity." And that is the best answer ever.