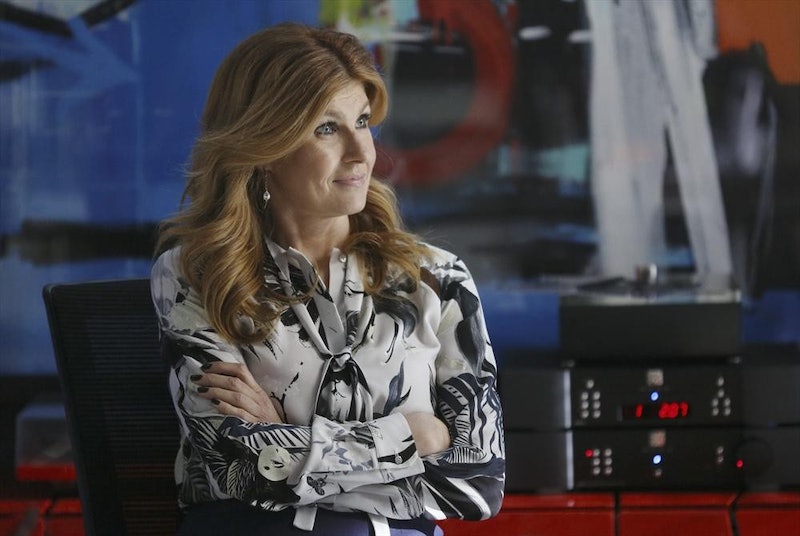 If last week's flashbacks weren't hard enough, Rayna and Deacon have drama coming on Nashville . How is Rayna going to react when she finds out that her soulmate has cancer? As of this week, she still doesn't know. However, Deacon can't avoid sharing his condition for much longer. According to the ABC press released for the next few weeks on Nashville, "Deacon’s secrecy over his illness causes him to push Maddie away." This is not good, because things are looking worse and worse for him. Plus, what if Maddie is a candidate for the liver transplant? Actually, I bet that's what's going to happen and I want to be on record as having predicted that. Highway 65, not Edgehill Records, of course.

The "Queen of Country" has a lot on her plate right now. She has to convince the public that she's not in rehab (or Mexico) following her breakup with Luke. Her eldest daughter was just signed to the evil Edgehill Records after Jeff Fordham blackmailed her ex-husband. I would not want to be Rayna Jaymes right now. This is going to be a major emotional blow once she finally finds out. Deacon may be trying to ignore the cancer, but Nashville certainly cannot.

I would hope that this news wouldn't push Rayna away out of some fear of getting hurt again. However, will it rekindle her romance with Deacon? Personally, I think that would be upsetting as well. Their history is rich enough without adding an illness. If that's the only way the Nashville writers could conceive of Rayna and Deacon getting back together romantically, I don't want it. However, last week made it clear that Rayna has already been doing some reflecting on their relationship. While she may not want to jump into anything after what she's been through, Deacon's illness might help her forget the past and let them at least communicate for a while. That is, if he ever communicates what's going on with him in the first place.

However, this could be the way that Deacon comes back into the picture. If Rayna was going to team up with anyone to "save" Maddie from Edgehill, it would be her biological father. Also, poor Daphne. Nobody claps and harmonizes with Maddie better than her little sister! As bad as Jeff Fordham is, I think the worst thing about this subplot is the tension it could cause between those sisters.

It looks like we may have to wait a long time to gauge Rayna's reaction. According to the official ABC press release for a Nashville episode coming up in March called “That’s the Way Love Goes," Rayna will reach out to Deacon to perform with her and the girls at the Grand Ol' Opry. Does she still not know his condition by then? Or is this an attempt to raise his spirits? Hopefully Nashville will give this storyline some real progress over the next few weeks, instead of keeping everyone but Scarlett in limbo.