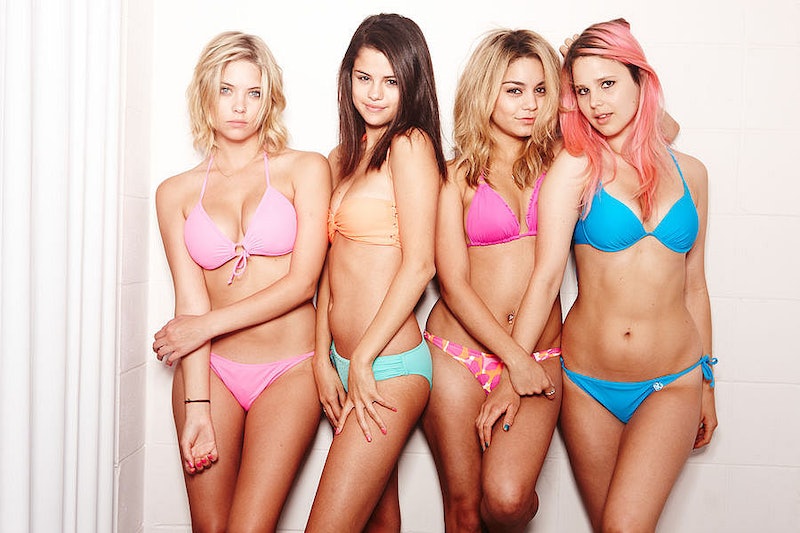 For the first twenty-two or so years of your life, there is one thing you can truly count on, and one thing only: Spring Break. Nobody can take it away from you. No matter how hard you are failing your classes or how many snow days you've had off, for one solid, blissful week, nobody is allowed to annoy you and responsibilities aren't real. It is cosmic and glorious and beautiful, and then one day, just like that, it's gone. You graduate, and they hand you that diploma with that big, doofy smile on their faces, hiding the dark truth behind their screaming adult eyes: They have taken Spring Break away for good, and it's never coming back. IT IS NEVER COMING BACK.

The year after you graduate you have so many things on your mind that this terrible fate will be one that you don't anticipate until it's already happening. I remember overhearing my mom and little sister making plans to road trip to the beach that year, and was about to chime in about a dessert place we should visit, only to have the words die on my lips like the ghost of Spring Breaks past. I couldn't go with them. It was over. Just like that, all the dreams I'd ever dreamed were like ill-advised Spring Break tequila shots slipping through my fingers. If you are still coming to terms with your lack of Spring Break during your first years out in Big Kid Grown-Up World, you'll know all these feelings far too well:

Several months of innocence where you don't realize what's coming

Or, more precisely put, what's not coming. You are briefly so bedazzled by all your new grown-up triumphs and struggles that you're like an excited child at a birthday party who hasn't realized yet that their balloon has slipped off their wrist and blown away.

The closer to Spring Break you get, the more you realize that Spring Break doesn't belong to your life anymore, and the realization just gets more painful all the time. You could be anywhere when it strikes. (No, YOU'RE the one crying in Trader Joe's.)

Scrambling to find some way to make it happen anyway

You know those split few seconds just before disaster strikes when you're like, "No, NO, I can FIX this"? It's the feeling I imagine Kanye had when he tried to give Taylor Swift's Grammy to Beyoncé. It is also the feeling you will have when you suddenly pull out your planner and try to justify taking a random week off work in March.

Realizing that you have no means to do it anymore

LOL YOU'RE BROKE. Game over.

Coming to terms with the fact that even if you went, you’d be the “old” one there

I used to laugh at that Avenue Q song "I Wish I Could Go Back To College". I very clearly remember sitting in a class my Freshman year where someone was performing it and feeling so smug about all the time that I had left, particularly in the last line: "But if I were to go back to college, Think what a loser I'd be... I'd walk through the quad, And think, oh my god, these kids are so much younger than me."

Moment of silence for my smug freshman self.

Resentment that knows no bounds

COLLEGE KIDS DON'T EVEN DESERVE SPRING BREAK! THEY KNOW NOT YET THE TRIALS OF THE WORLD BEYOND THEIR COCOON! THEY HAVEN'T EARNED IT. YOU HAVE EARNED IT. Most of your thoughts are in a caps lock of rage at this point.

Rebellion in the form of doing a bunch of lazy things

Just because you can't have Spring Break doesn't mean it isn't Spring Break in your heart. So you kick off your shoes, ignore a few emails, and before you know it, the situation has spiraled so far out of control that you're an hour away from a zillion deadlines and there is some food remnant growing mold in your bed and a cat that isn't even yours will have broken into your house to judge you.

Instant regret and attempting to make up for lost time

Even your fake Spring Break gets wrecked by adult responsibility.

Bitterness at the internet and everything in it

You might as well just shut off all social media for a solid month between March and April, since all the Spring Breaks are staggered and you're going to be seeing an endless stream of statuses and articles like "15 Things You Should Say YOLO About During Spring Break Before Someone Punches You For Saying YOLO Too Many Times".

One more drunken night before you let go

Time to fit as much Spring Break as possible into a Friday night. You can do this. You believe in you.

You asked for this.

Somewhere (probably in the bottom of your toilet or the bottom of your bottle of Tums) you'll end up finding cold, hard reality, summoning you back into its clutches. You had your fun for all those years. Now you just have to wait to get insanely and publicly drunk until Thanksgiving like all the other boring adults in the world.