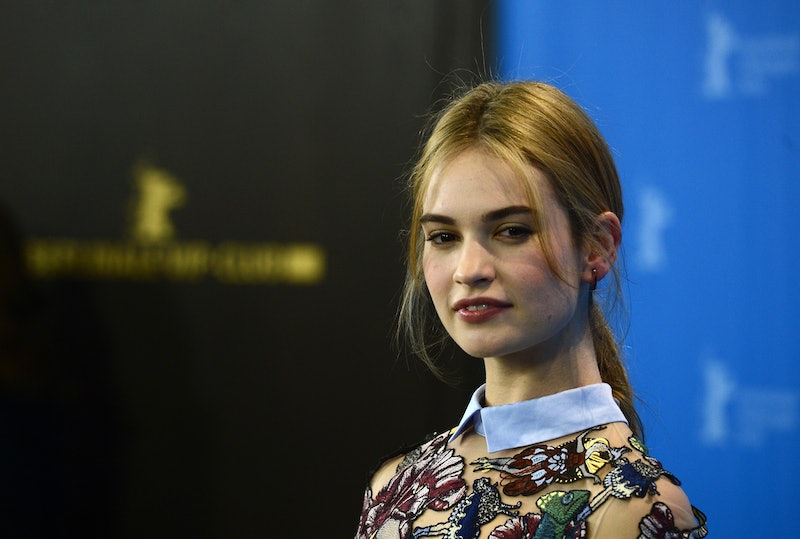 Lily James (formerly of Downton Abbey fame — she plays Lady Rose on the popular period soap opera) has been killing it lately on the style front. Her big star turn as the title character in the new, more feminist-friendly Cinderella (alongside Robb Stark — I mean, Richard Madden — as none other than Prince Charming) is taking her globe trotting in a major way, and boy is she delivering — she's worn everything from a sweeping, blush pink Christian Dior ball gown in Berlin to a fire engine red halter dress in Milan: She's making that red carpet her personal runway.

Of course, her character's (literally) magical style is hard to live up to (the costumes on the film are absolutely gorgeous — her powder blue midnight ball gown looks like it took about a million yards of fabric, and it makes its iconic 1950s cartoon inspiration look like peanuts), but James is doing just fine. She kicked things off at a photo call at the Berlin International Film Festival by wearing a kicky Mary Katrantzou dress, and every dress ensemble since has just gotten better and better. Let's take a look at all of her best Cinderella red carpet fashion moments so far!

At the Berlin Premiere of Cinderella

At a Moscow Photo Call

At the Moscow Premiere of Cinderella

Very, very classic and pretty — in other words, perfect for Cinderella.

At a Milan Photo Call (With an Assist from Richard Madden)

Pretty darn fab, no? I can't wait to see what she wears next.

More like this
A Definitive List Of Olivia Wilde’s Best Red Carpet Outfits Ever
By Dominique Norman
Here Are All 703 Outfits Rachel Wore On Friends
By Kat George
Dua Lipa On YSL Beauty, Plus Her Fearless Approach To Hair & Makeup
By Erin Stovall
Hailey Bieber Just Wore A Dress Covered In Piercings For Miami Art Basel
By Dominique Norman
Get Even More From Bustle — Sign Up For The Newsletter