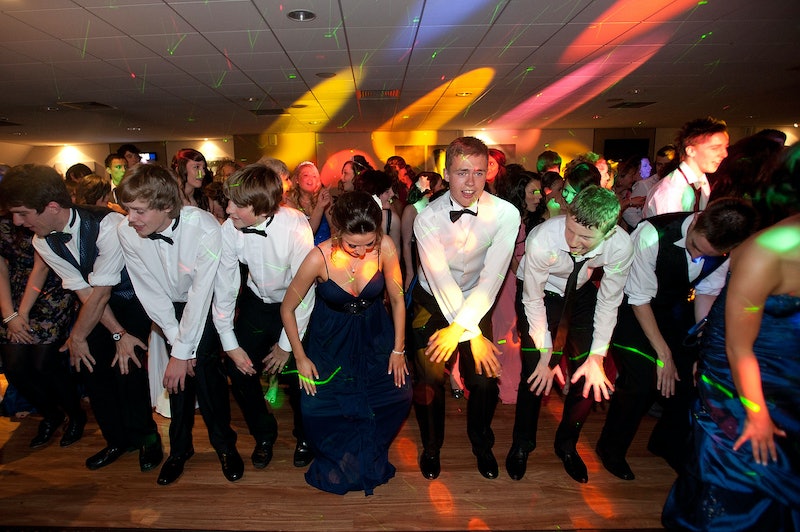 As if being single in high school wasn't hard enough, apparently school administrators in Utah are doing their best to make them into social pariahs. Case in point: Bountiful High School wouldn't let a single student into their Valentine's Day dance because she was the odd one out in her trio of friends. It's a situation so absurd that it sounds like something from the high school version of New Girl, but somehow I doubt Josee Stetich, the young woman in question, is laughing.Surely this is just an instance of mis-communication, right? I mean, no school administrator would turn a teenage girl away at the door of a dance after she and her friends spent hours getting ready unless they had a really good reason. Nobody could possibly be that cruel. Maybe Stetich is Patient Zero for a highly communicable virus that turns people into zombies, and officials were forced to turn her away at the door to prevent an apocalypse. Or maybe... actually, nope. I can't come up with anything else that would justify denying a girl entry to a school dance simply because she wasn't part of a couple.Unfortunately, it looks like the staff of Bountiful High School really are just that mean. Here's a description of what took place, from ABC News:

"At the dance... school administrators told Lindmeir and Robertson, who bought a ticket together, that they could attend the dance as a couple, according to Robertson, but that Stetich could not get in solo."

Nary a word about a zombie apocalypse to be seen, so I'm forced to conclude that these people are just the worst. Stetich even offered to pay the $30 for a couple's ticket, according to Jezebel, and they still denied her entry. When it became clear that she wasn't going to be allowed in, the other two friends asked for a refund, which ended up costing the school "around $50 because they wouldn't let us three in," Mikayla Robertson told ABC News. Apparently Bountiful High would rather lose money than get a teenage girl's singleton germs everywhere. But hey! T

he trio ended up heading to a chocolate factory and getting a tour from the owner, and that sounds like way more fun than standing around in a room full of teenage hormones and body odor.

<img alt="" src="http://media.tumblr.com/tumblr_llgozzeEkC1qafrh6.gif" class="article-body-image" title="Image: http://media.tumblr.com/tumblr_llgozzeEkC1qafrh6.gif"/>If you think this is the only instance of schools taking dances way too seriously, though, you don't know the American education system very well. A high school in Liberty, Kansas made headlines in 2013 for denying a member of the Air Force entry to prom as his sister's date, the New York Daily News reports. At the time, the school cited a policy prohibiting anyone 21 and older from attending school dances, although they hastily made an exception after the Internet caught wind of the story.

It's not all school officials turning school dances into something newsworthy, though. Remember the "white" prom of Wilcox County High School? In 2013, a group of students drew attention to the fact that their Georgia high school was still hosting segregated proms when they attempted to host an integrated one. According to CBS Atlanta, the caucasians-only dance was hosted by parents every year, so it was technically legal. Despite a substantial amount of media attention, the integrated prom faced "a lot of opposition," CBS reports, and the white prom carried on as usual that year.

<img alt="customer service animated GIF " src="http://media.giphy.com/media/eCvBzbkajQYy4/giphy.gif" class="article-body-image" title="Image: http://media.giphy.com/media/eCvBzbkajQYy4/giphy.gif"/>Just last year, Pennsylvania school officials decided to suspend a student for three days after asking Miss America to be his senior prom date, according to the New York Daily News. Their justification? His suspension was an effort to "communicate... expectations and rules [for student behavior] to students and families." She didn't even say yes, so it's not like she would have broken any age limits by attending. The student ended up saying he regretted his actions for taking away from the beauty queen's efforts to promote diversity, but Miss America herself agreed that the sentence was pretty harsh for just publicly asking someone to prom.

<img alt="personal animated GIF " src="http://media.giphy.com/media/LrnlRuehwS2WY/giphy.gif" class="article-body-image" title="Image: http://media.giphy.com/media/LrnlRuehwS2WY/giphy.gif"/>Whether you're being forced to wear a jacket over a dress that bares your shoulders (ugh), sent home for wearing "immodest" dresses (double ugh), or banned from prom for being gay (no amount of ughs can express my disgust), clearly people need to take a chill pill when it comes to school dances. Is a room full of teens standing around judging each other and awkwardly trying to grind without adults noticing that big a deal? Spoiler alert: the answer is along the lines of "nah."Images: ladygagasreactions/Tumblr, Giphy (2)