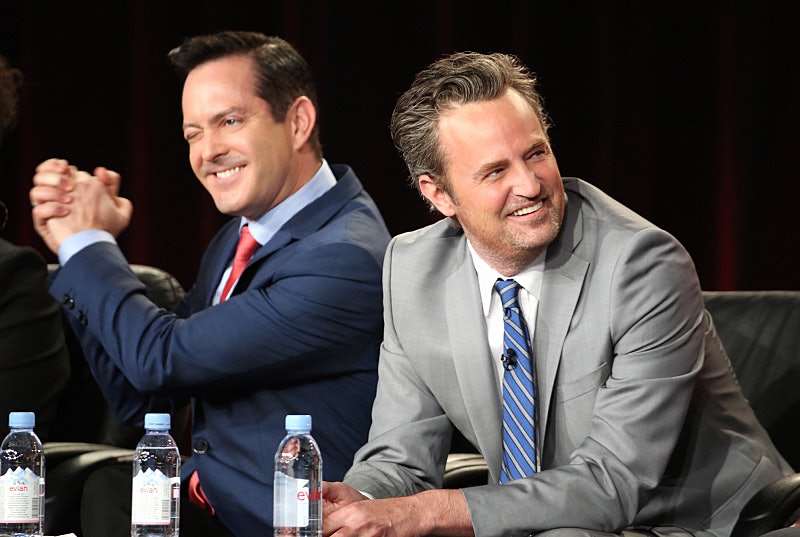 Since Matthew Perry isn't just starring in his remake of The Odd Couple , but also producing the series and co-writing the pilot, will anyone from Friends guest star? If he wants to make some calls and ask for some favors, I'm sure that CBS would love it. Friends is new to Netflix, so now even the very young and the very out of touch are familiar with the six stars of the classic series. There aren't any big guest stars in the cast so far, mostly because the entire series hasn't shown a single episode yet.

But it's not just Perry who should call in some favors — everyone in the Odd Couple cast has been a part of an amazing ensemble. Tom Lennon, who's playing Felix Unger, was a member of The State and has been in (or written) basically every studio comedy in the past 10 years. And in the supporting cast so far, the show has one The Wire veteran, one member of the Community study group, a Kid in the Hall , and Lindsay Sloane, who played the villain in Bring It On. So there's more than just the Friends who should make guest appearances. How amazing would it be if Dominic West showed up playing Felix's Irish best friend from study abroad? Or if any of the Community cast showed up to play a weird neighbor? It might be able to boost what's otherwise kind of a tired premise.

But before I get too ahead of myself with the fantasy casting, let's look at the five other Friendsto see how if they could ever appear on The Odd Couple.

I KNOW he's not busy. Seriously, he's a film director now, and there's a lot of time between those gigs. This was not a burn! (It was kind of a burn.)

Look, if Schwimmer is the most likely to be free for this, Kudrow's got to be the busiest, right? She just came off of the second season of The Comeback, the fourth season of Web Therapy, and she's done guest roles on a few dramas like Scandal. She's got a ton of her own irons in the fire, so this probably isn't a priority.

Before The Odd Couple, Chandler and Joey were the mismatched roommates. And they developed the greatest chemistry of any pairing on the show (this should not be debatable), largely because LeBlanc's dumb guy act worked perfectly against Perry's hyper-verbal Chandler Bing act. And he's on a Showtime series, which is in the CBS corporation. I'd say he has a pretty good chance of showing up if the new series lasts long enough.

We already know that Lauren Graham is on tap to play Oscar's ex-wife in future episodes, but Courtney Cox would make a perfect perennial bad idea rebound girlfriend. She could be like his version of Ron Swanson's Tammy II.

I know she just lost out on an Oscar nomination, but unless The Odd Couple becomes the biggest show on TV, it seems like a long shot.