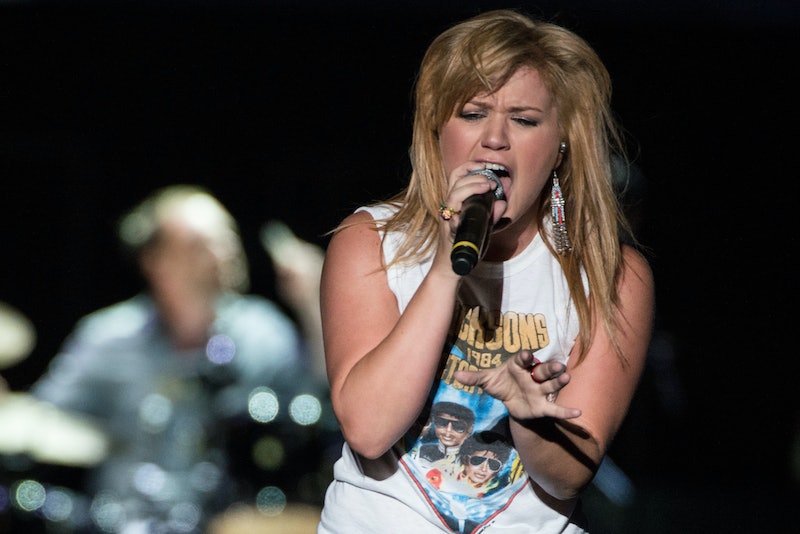 People don't want to play with Kelly Clarkson — at least, according to the American Idol winner. In a new interview with BBC1 Radio, Kelly Clarkson revealed why she doesn't tend to collaborate with many artists — and that's mainly because, well, apparently no one wants to. Seriously. Clarkson revealed to host Nick Grimshaw that while she's asked several celebrities to sing with her, most of them have turned her down, so much so that she joked that she must have some sort of disease to keep other artists away: "I ask good people, I don't want to sing with crap people, so I mean, I ask people who are great vocalists, but I'm not going to point out anyone," Clarkson told Grimshaw. "I have asked several people... Sometimes I feel like I have the plague, or leprosy, they're like, 'If you get too close...' I don't know." Yikes.

It's hard to see why other artists wouldn't want to record with Clarkson. She's one of American Idol's biggest success stories, a powerhouse vocalist, and has plenty of number one singles under her belt. Clarkson doesn't really get it, either — according to the interview, Clarkson thinks she's just a "very nice person" you should want to sing with. I mean, John Legend got the memo — what's taking everybody else so long?

Of course, not everyone is fit to sing with Clarkson — after all, she's all about asking the best of the best. So who would be an awesome fit to sing besides her? Here are celebrities who would work well when paired with the singer:

When I think of singers who I would most want on my breakup playlist, I automatically pick Pink and Clarkson, so it's only a matter of time before the two team up. Plus, Pink's more than just an amazing aerial performer — she's also a killer vocalist.

I desperately want Clarkson to chime in on the chorus to Trainor's "All About That Bass."

Clarkson already covered Swift's "Shake It Off," but how much better would it be if both singers performed it together?!

In terms of vocalists, you can't get much better than Sam Smith. He may be new on the scene, but even Clarkson might struggle to keep up with his haunting voice — mainly because it never fails to make people cry mid-song.

A girl can dream, right?