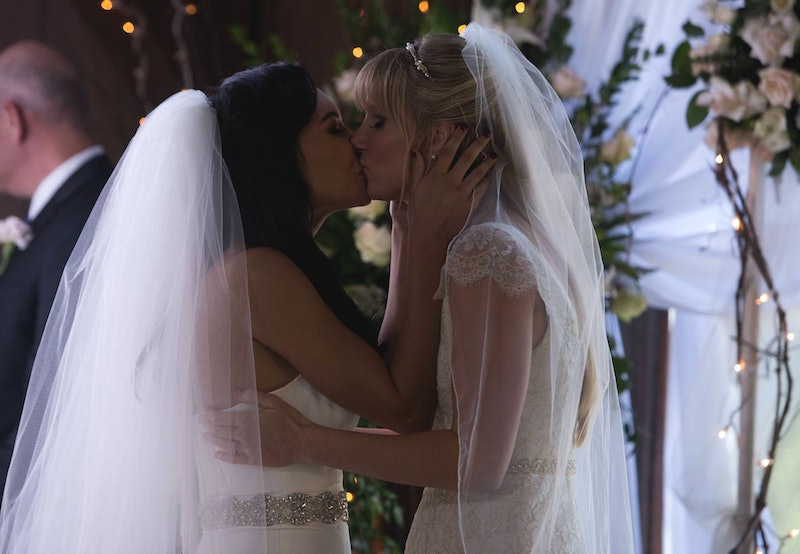 I will never understand the kids of Glee for a number of reasons, but perhaps the biggest one is their desire to jump ahead ridiculously far in their relationship timelines. And that's probably why there have been eight total Glee weddings & almost-weddings in just five and half seasons. That's more than one wedding (or could-be wedding) a season which sounds absolutely bananas when you think about. The oldest former member of the New Directions — I have a feeling it's Puck, but who's even keeping track — can't have a legal drink, and yet everyone seems to be heavily invested in wifey-ing up. This season it's fan favorite couple Brittany and Santana who are getting married despite the fact that neither of them seem to have jobs or a place to live outside of their parents' homes. (I'm trying not to judge fictional characters too harshly here, but planning & solid finances are always a good bet. Come on — no matter what Will Schuester taught you, a marriage can't thrive solely on love alone, even if Brittana has that in spades.)

And I'm not actually blaming Brittany and Santana here — they're in love and we all love it — and their wedding isn't the only WTF wedding idea that the Glee writers have had. In fact, compared to some of Glee's other engagements, weddings, and almost weddings, Brittana's wedding seems like a fairly stable arrangement. And in case you're shaking your head, here are some other Glee couples who made it down the aisle or very nearly did — and you'd better believe I'll tell you whether the nuptials in question were a very terrible idea.

Oh, hey. Remember this? Way back in Season 1, Emma attempted to placate her feelings for Will by marrying Ken, the former football coach. Sure, Emma had no plans on living with, touching, or even really talking to Ken, but he loved her all the same. They never went through with the marriage, but not because of any of that — Will finally made his move on Emma at the end of the season, and Ken bailed on the series.

Cooter and Beiste (who was presenting as female at the time, prior to his transition to Sheldon) had a sweet courtship and it was nice to see Beiste happy with someone, especially after he confessed to Will that he had never been so much as kissed. Of course, because the show never allows Beiste to catch a break, so Cooter wound up revealing his abusive nature only after the two wed. Beiste left Cooter and announced that he was finally ready to love himself. But that didn't make this marriage hurt any less; anytime Beiste's heart breaks, so does mine.

Finally, a marriage that Glee got 100 percent right. Kurt set up his father Burt with Finn's mom Carol the duo wound up really hitting it off. Burt and Carol were married in Season 2 and they proceeded to join their families. Despite initial awkwardness, Kurt and Finn became brothers under one awesome parenting team.

You know a show is wedding-happy when it decides to have a character marry herself. And you know a show can't build stable relationships to save its life when it has the same character divorce herself seasons later.

Anyone else remember when Emma was married to that hot dentist played by John Stamos? It was only a few episodes before she left the Full House alum for Will, but what magical Season 2 moments those were...

Emma & Will: An Almost-Wedding Followed By A Cute Wedding

Emma and Will were going to get hitched eventually — the show had been building up their relationship from the pilot. However, even I didn't expect how difficult the show would make things for the couple — after spending months apart before the wedding, Emma actually decides to leave Will at the alter instead of going through with the wedding, in a very dramatic scene set to a song from a Stephen Sondheim musical. They eventually do make it down the aisle, in a small ceremony in the choir room. (What hasn't happened in that choir room?)

Finn and Rachel got engaged in their senior year of high school, mostly because both were too afraid of losing the other should their paths diverge post-grad. It never happened — Rachel moved to New York, Finn returned to McKinley, and while they did reunite at Emma and Will's wedding they did not get back together. Sadly, Cory Monteith passed away before Rachel and Finn could reach endgame status — I have no doubts that these two would have found each other again come the end of the series.

Blaine and Kurt as a couple were so beloved that even semi-heartless Sue was rooting for them to get back together. Unfortunately, their case is yet another reason why it's a terrible idea to get engaged in high school — it doesn't last once you're living together in the "real world." We didn't get too see too many of the details of Blaine and Kurt's breakup, though flashbacks show it stemmed from the pressures of planning a wedding — and a future — way too early on in their lives. That's not to say we should give up hope — Blaine and Kurt are totally endgame, and if you don't think so, Friday's episode totally proved it.