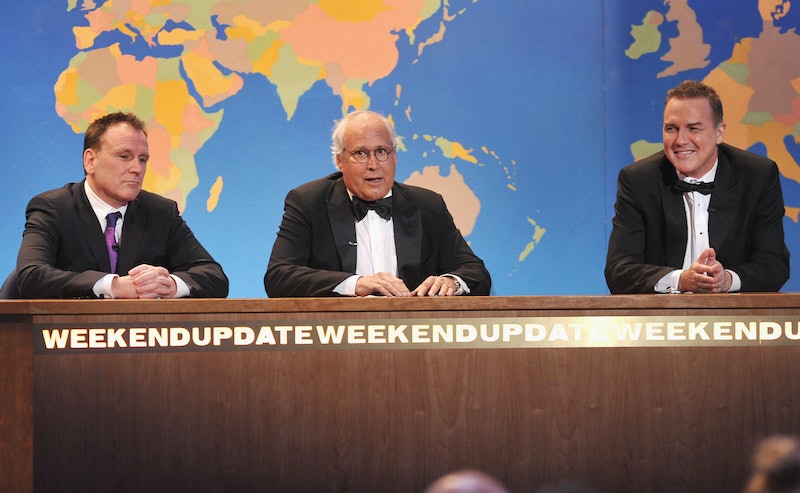 It has been almost a week since we all bore witness to Saturday Night Live's 40th anniversary special, and, in that time, many of us have been unable to get the image of Betty White and Bradley Cooper kissing out of our heads. I know other things happened — Taylor Swift performing on the fly happened — but it's the first image that sticks with me the most as this work week keeps on chugging along. However, it appears there was even more going on behind the scenes at SNL 40 than just what happened at the after parties or what the celebrities were doing out in the SNL audience. In fact, cast member and writer Norm Macdonald live tweeted insider secrets about SNL 40 that shine a light on various parts of the production, on those things people are dying to know and on those things that they hadn't thought about at all.

Of course, MacDonald's account of the journey to make the anniversary special happen is extremely lengthy — pretty much 100 tweets long, in fact — and it's understandable if you don't have time to read the entire essay transcribed at the Gothamist or on Macdonald's Twitter. For people who like their information to come in handy information lists, here are the nine best insider facts that Macdonald shared with the world on Wednesday.

1. Celebrity Jeopardy Was Ripped Off

2. The Funniest Character Is Not Connery Or Burt

3. The Name Of The Game Was Impressions

Considering this is how we got epic moments like Maya Rudolph imitating Beyoncé, I am not going to complain about the impressions anywhere in the special. Agree to disagree.

This might come as a surprise to people considering the return was hyped up as being a lot more extended and intense than it actually ended up being. Then again, there's apparently a reason for that...

5. There Was Going To Be A Bill Cosby Joke

I'm not sure how I feel about this.

6. Bill Murray Is Super Into Golf

All right, so that's not so much insider information. But who loves golf more than Saturday Night Live?!

7. Paul McCartney Performed For Them Backstage

Oh, to be a fly on the wall during that session...

8. And There Is Video Evidence

...and it's not on the Internet why? I think I'm more offended about this than anything else this morning. How else are the young whippersnappers going to figure out who Paul McCartney is?

That certainly clears it up. And I'm still not sure how I feel about this. One thing is for sure, though. Macdonald was right: it was quite a week.