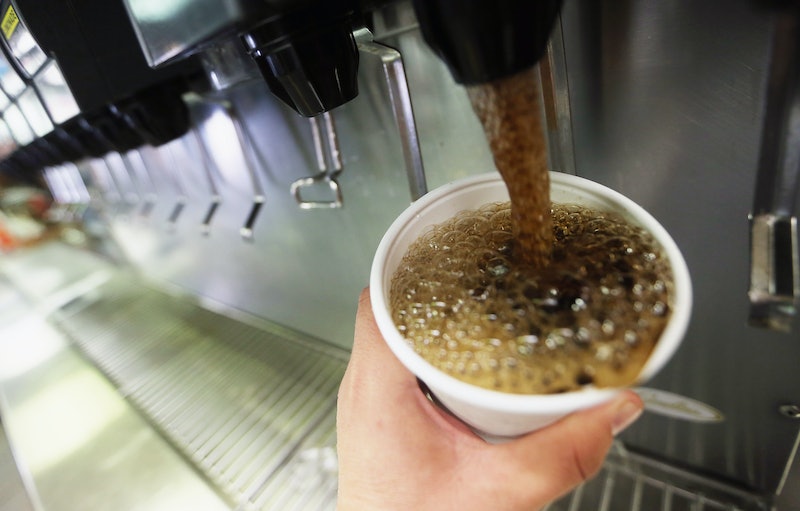 A new Consumer Reports study warns that drinking soda may increase your risk of cancer, so you might consider stepping away from your Big Gulp. The World Health Organization's International Agency for Research on Cancer believes that a chemical called 4-methylimidazole (4-Mel), which is used to give soda its caramel coloring, may have carcinogenic properties. And California's safety threshold of 29 micrograms of the stuff per day comes in just a single 12-ounce serving.

In its study, Consumer Reports found that soda consumption has been on the rise, with the average intake among drinkers ranging from anywhere from one to two-and-a-half 12-ounce cans per day. The implications of this consumption, according to the latest report are dire. "Our analysis shows that at this level of consumption, we would expect to see between 76 and 5,000 cases of cancer in the U.S. over the next 70 years from 4-Mel exposure alone."

"We don't think any food additive, particularly one that's only purpose is to color food brown, should elevate people's cancer risk. Ideally, 4-Mel should not be added to food," writes Urvashi Rangan, a toxicologist and executive director of Consumer Reports' Food Safety & Sustainability Center.

In California, any food or drink exceeding 29 micrograms of 4-Mel is required to carry a warning label, reading, "WARNING: This product contains a chemical known to the State of California to cause cancer."

In California, any food or drink exceeding 29 micrograms of 4-Mel is required to carry a warning label, reading, "WARNING: This product contains a chemical known to the State of California to cause cancer."

According to the U.S. Food and Drug Administration (FDA), however, the threat to consumers is minimal. "Based on the available information, FDA has no reason to believe that there is any immediate or short-term danger presented by 4-Mel at the levels expected in food from the use of caramel coloring," reads a statement on the agency's website. Consumer Reports is suggesting that the "levels expected" as used by the FDA's assessment simply aren't in line with what soda consumers are drinking, only accounting for roughly four ounces of soda daily.

This is far from the first health concern raised by cola intake. Studies have shown that even diet soda increases one's risk of developing type 2 diabetes. Additionally, concerns have been raised about the long-term effects of exposure to artificial sweetener aspartame — though the FDA and American Cancer Society have yet to issue any statements that would suggest definitive proof of the chemical's carcinogenic properties.