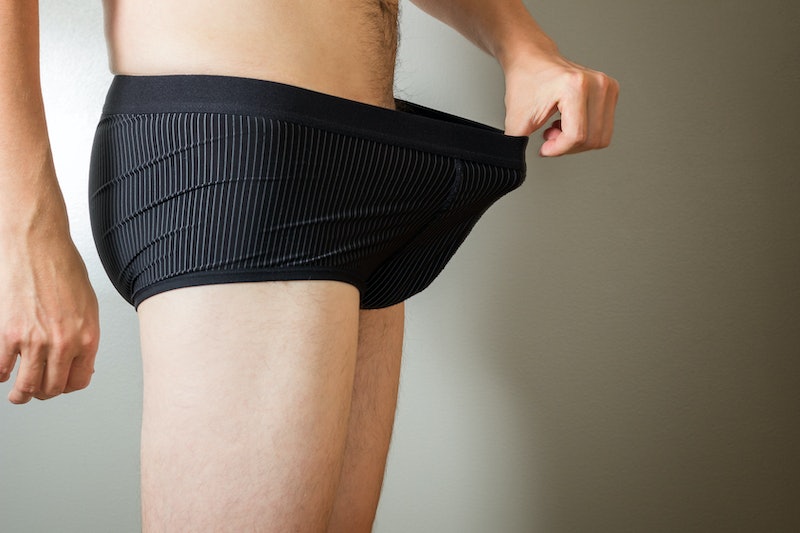 The body positive movement talks about body image and beauty standards primarily as they relate to women, but one man has decided to change this by planning a small penis party to celebrate, in his words,"tiny todgers, compact cocks, wee willies, mini members, and dinky dicks." Ant Smith is the man behind the concept and has openly shared that he has personally struggled to accept his penis size, which comes in at about four inches when erect. In case you were curious, the average penis size is five to six-and-a-half inches in length, according to the famous Kinsey Institute. Indeed, Smith's junk comes in smaller than the statistical average.

Smith has been an advocate for body positivity for men ever since he has started to publicly discuss his penis size and the shame that exists around small penises. In response to the attention and support he's received, he even wrote a poem about the issue entitled "Shorty," which he has performed all around England, according to The Independent.

Now, Smith has decided to take his passion into orchestrating a cabaret called "The Big Small Penis Party." The event, said to create a "balanced sense of fun," is set to take place on March 7 and will feature a creative way of collecting admissions: instead of charging a standard ticket fee, Smith has decided to have guests pay 50 pounds per inch of their penis size! This is one case where it's beneficial to measure in on the small end. Not only that, but in an effort to conduct some amateur research, the average penis size of the attendee's will be announced during the event, based on the self-reported sizes that will be collected at the door.

No stranger to small penis jokes, Smith plans to keep the event lighthearted, saying that "I do think humour is a great healer." There will be a wide variety of performers, comedians, and muscians present and Smith will be performing some of his original poetry. He wants guests to appreciate the range of penis sizes and instead of wallowing or looking for a solution, cause men to appreciate their bodies. "They tend to take a very 'I have this problem how do I fix it' sort of approach," he told The Independent. "That’s fundamentally misguided. We actually need to be taking the 'we are what we are, let’s celebrate diversity' approach."

In case you were wondering, yes, women can attend the event — and for free!

If you want to learn more about the event, see a sneak preview of the lineup, or possibly attend if you're in the UK, check out the event posting in the Small Penis Party user group.