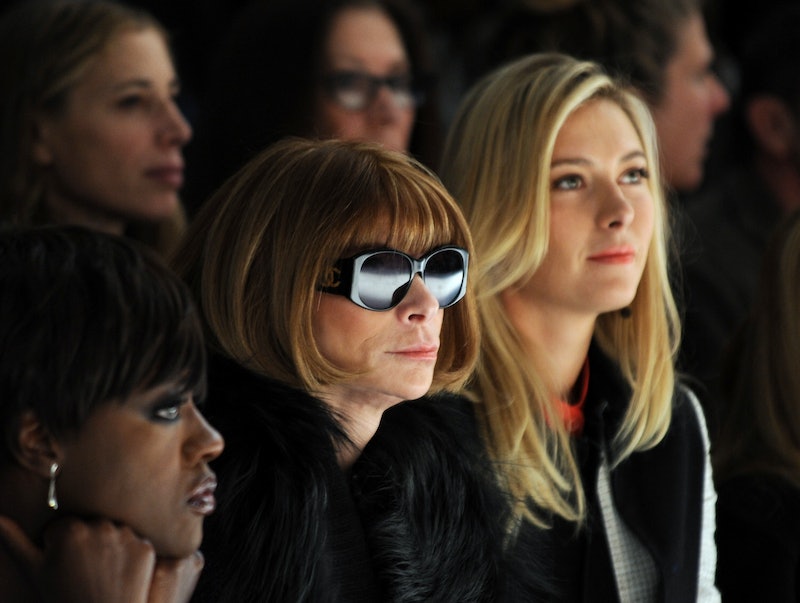 It's no secret that Anna Wintour is bae at New York Fashion Week. The EIC of American Vogue is known for making and breaking the careers of design hopefuls and determining the biggest trends. So, of course, a number of industry enthusiasts are obsessed with her, Hollywood's inner-most circle being no exception. Can you blame them? However, it's also very well-known that Wintour reigns with an iron fist and a (slightly terrifying) icy demeanor. The Queen Bee of the fashion world cares deeply about maintaining her personal space. Which is exactly why I LOLed so hard when I got a glimpse of the photos surfacing of 50 Shades of Grey star Dakota Johnson naively trying to hug Anna Wintour at the Hugo Boss show on February 18th.

Wintour, who has publicly expressed that hugging just isn't really her thing, kept her cool in the pics, cracking a rare and enthusiastic smile, but clearly wasn't having it when Johnson opened up her arms for an attempted embrace. Luckily for everyone involved, Vogue editor-at-large Hamish Bowles quickly swooped in to do some damage control, intercepting Johnson's bold move. Apparently, even gracing the cover of Vogue's February Issue wasn't enough to make Johnson a welcome hugging partner.

The whole ordeal begs the question — who does Anna Wintour hug, if anyone? A quick Google search yields the answer — there are several pictures of Wintour and Michelle Obama embracing one another around the interwebs. It seems like FLOTUS might be the only person allowed to get that close to the Vogue editrix. Case in point:

She doesn't even seem like she hates it! Perhaps Wintour will only hug people she deems equal to her mega-powerful status?

So for the rest of us (celebrities akin?), it seems as though we will most unfortunately have to continue to love and admire Ms. Wintour from a polite, non-invasive distance.