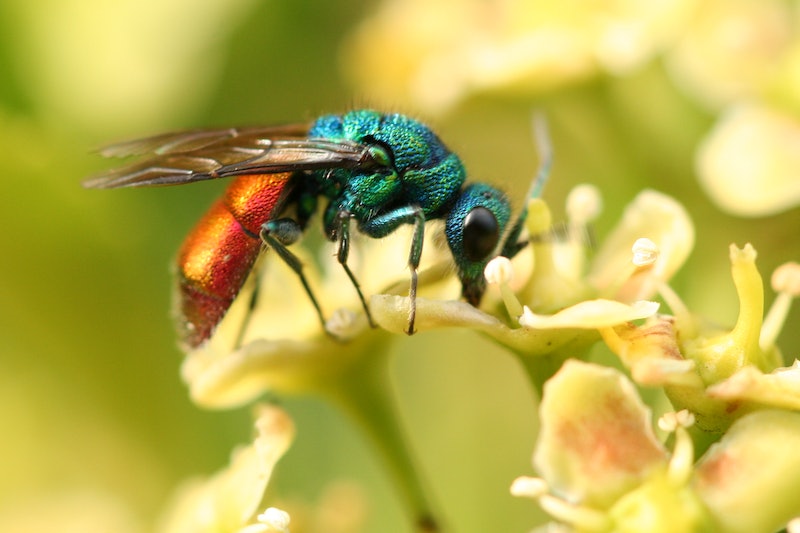 Insect ecologist and philosopher Jeffrey Lockwood has said, “None of us is neutral about insects.” Most of us dislike them, some of us hate them, and a few of us love them. In his book The Infested Mind: Why Humans Fear, Loathe, and Love Insects, Lockwood suggests that the nearly universal human fear of insects is rooted in both evolution and culture. In an interview with Popular Science, Lockwood says,

… I think evolution has set us up over millions of years of contact with insects and small scurry things for these creatures to draw our attention. …But then, once they have our attention, how we respond to them I think is largely a matter of cultural influence. And of course, in the modern world we have very little experience with positive encounters with insects.

Lockwood points out that many people’s intense fears of insects are learned behaviors; as we grow up, psychological forces in our lives, from our parents’ reactions to bugs to insect-horror films like Them! and The Fly, teach us that insects—including harmless, and even beneficial ones—are to be feared and avoided.

Ahem. This is all a polite way of saying that I know that my tendency to freak out at creepy crawly things is completely irrational. THAT SAID. Some insects are legitimately, full-stop, no-holds-barred terrifying, and I have put them here in a handy list for you so that we can all be terrified together. You’re welcome. Many of these insects’ everyday behaviors would fit in perfectly with that of splatter-film serial killers and sci-fi horror. Have I mentioned that there are zombies??

WARNING: Some of the videos are really, really gross. Watch with caution. If you have a sensitive stomach, maybe just stick to the pretty(?) pictures.

Let's start out with something easy: The flower mantis, usually found in southeast Asia, is actually kind of pretty—at least, it is until you realize that it's beauty is merely a clever disguise for a ruthless killing machine. The mantis, which looks startlingly like a pink and white orchid, camouflages itself among the flowers before making its kill.

ZOMBIE SLAVES, people. To reproduce, the jewel wasp incapacitates a cockroach by striking it in a very precise part of its brain and injecting mind-controlling venom. The wasp leads the now enslaved roach into its lair, lays an egg in its abdomen, and waits. Eventually the egg hatches and the horrific baby-wasp eats the cockroach before emerging into the world. The wasp eats the cockroach's organs in a specific order, to keep it alive as long as possible. I CAN'T EVEN.

The green-banded broodsac is a parasitic flatworm that uses both birds and snails in its bizarre life cycle. Adult worms live inside the intestines of birds; they eventually lay eggs in the intestine, and the eggs are released with the birds' droppings. A snail will then eat the egg, which will then hatch into larva in the snail's intestine. Eventually the young worms will move into the snail's eyestalks (that's what's going on with the swollen eyestalk in the pic above). The now-blinded snail will wander around in the sunlight, get eaten by a bird, and the the whole disgusting cycle will start again.

Texas Giant Centipedes are not terribly dangerous (they'll give you a nasty bite, but won't kill you) but they hold a special place in my—what's the opposite of "heart"? "Home of deepest, darkest fears"?—because they show up sometimes at my parents' house out in the Texas Hill Country. Friends, you have not known true fear until you have stumbled upon one of these six-inch long monsters on the way to the bathroom in the middle of the night. The freakiest part is that they sort of slither in a sideways motion that allows them to move very quickly, onto walls and under doors. They can be anywhere. Dear God, my skin is crawling just thinking about it.

The human botfly is especially creepy because it infests humans. Here's what happens: unsuspecting humans travel to South or Central America, get botfly eggs on themselves, the eggs hatch, and the larva burrows into the humans' flesh, growing and feeding for up to three months.

Here is a super-disgusting video of someone removing a botfly from a person's head. This is not for the faint of heart. Seriously, don't even click on it. Dear god, why am I even sharing this with you? What's wrong with me? I'm sorry. I'm so, so sorry.

As this article from Cracked succinctly describes, the Japanese Giant Hornet is "the size of your thumb and it can spray flesh-melting poison." Usually the hornets feed on honeybees, laying waste to whole hives in a few hours. Their venom is powerful and abundant, affecting the nervous systems of the hornet's victims. In 2013, CNN reported that the giant hornets had killed 42 people in China.

Acknowledgements: Thanks to Ian Morrison, whose penchant for completely disgusting bug videos was an invaluable resource in researching this article.