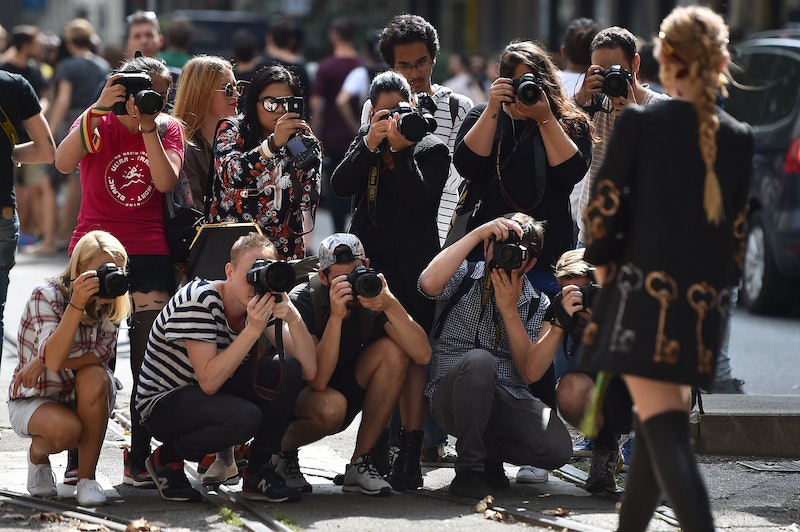 While Fashion Week is perfect in own imperfections, the extravaganza does merit the facelift it will receive come September 2015. Along with a scheduling overhaul, a new website, and new locations, the week will be under new management. The timing couldn't possibly be better. There is a reason why even the most well-oiled machines need a tune-up now and then, and Fashion Week was in dire need of attention to its shortcomings. Certainly, the designs are as aesthetically challenging as ever and labels produce a significant number of utterly beautiful designs, but Fashion Week has a handful of underlying kinks that have nothing to do with the quality of workmanship.

Ultimately, the week's most significant underlying flaws pertain to its evolution over time from a series of trade shows held only for press and editors, to a free-for-all which now includes reality stars and their sobbing infants. As the shows themselves have expanded to include more guests, Fashion Week's schedule has come unhinged, to the point where attendees themselves arrive 30 minutes late knowing that they won't miss the show's tardy premiere. From the bottom of my sartorially obsessed heart, I love Fashion Week and many of the values that it stands for. However, a few things have to change, or next season is going to be a total disaster.

1. The Utter Lack Of Timeliness

When Fashion Week rolls around each year, I crack the same tired witticism that while I run several minutes late occasionally, Fashion Week runs a week late on most occasions. While the fashion industry isn't Wall Street or the newsroom of a major news network that must operate on an extremely rigid timetable, it seems more than slightly farcical to make eager show attendees wait sometimes hours in subzero temperatures for the doors to open on a show that will last approximately ten minutes. That being said, the best shows are often worth the wait.

On a different type of timeliness, NYFW is sadly struggling to keep up with the digital age. With print magazines seeing massive layoffs practically every week, more and more consumers are going to online sources to find their fashion inspiration. Who wants to look at clothes that won't be ready for six months in the age of "right now"?

If you wish to wear minimal clothing to fashion week, at the very least commit to sporting the look for longer than the time it takes to walk between your SUV and the door of the show. The number of bloggers and models nearly blue from the cold I viewed on the streets of New York City during Fashion Week could have filled Tommy Hilfiger's Fall 2015 football field. Street style mavens either need to wear more clothing or cease pretending that they are above the cold. You just look silly.

3. Models Who Sport Half Of Their Costumes And Makeup On The Street Post-Runway

While carrying a Tommy Hilfiger helmet under one arm after walking the runway or sporting Jeremy Scott's circus cosmetics post-show is akin to sporting battle stripes proving one's involvement in a great cultural moment, the look loses its context the second street style photographer snap a photograph. To the rest of the world, it simply appears as though the circus is in town, sometimes frighteningly so, which can ultimately give the designer a bad review.

4. Nip Slips On The Runway

I have absolutely no sympathy for top-tier designers whose models experience the dreaded nip slip on the runway at Fashion Week. If a brand's creative team is talented enough, such mistakes should be nonexistent. Fashion Week attendees are looking to enjoy a display of artistic ingenuity, not a peep show — unless I'm much mistaken.

5. Children In The Front Row

As a 4-year-old, I certainly would not have had the patience nor the attention span to sit through a runway show. Therefore, it baffles me why children under the age of ten continue to crop up in the front row of Fashion Week presentations. The world seemed appalled at North West's Fashion Week meltdown, but frankly I'm surprised it hasn't happened before. Let children — and other show attendees — off the hook and reserve Fashion Week for adults.

6. Fashion Shows That Have Nothing To Do With Fashion

When a Fashion Week show is meant to be a political statement or an art installation, it seems that the designer should call a spade a spade and simply designate their collection a performance piece. Fashion shows can be many things, but if the clothing takes a backseat to another agenda the audience should at least be prepared.

With the advent of street style blogs and social media sensations, anyone can become an overnight success. However, the least chic phenomenon at Fashion Week often occurs as a by-product of such stardom and mass adoration. Unless a designer or blogger has cured cancer or donated all of their proceeds to cure world hunger in addition to changing the face of fashion, it seems they have little entitlement to a superiority complex.