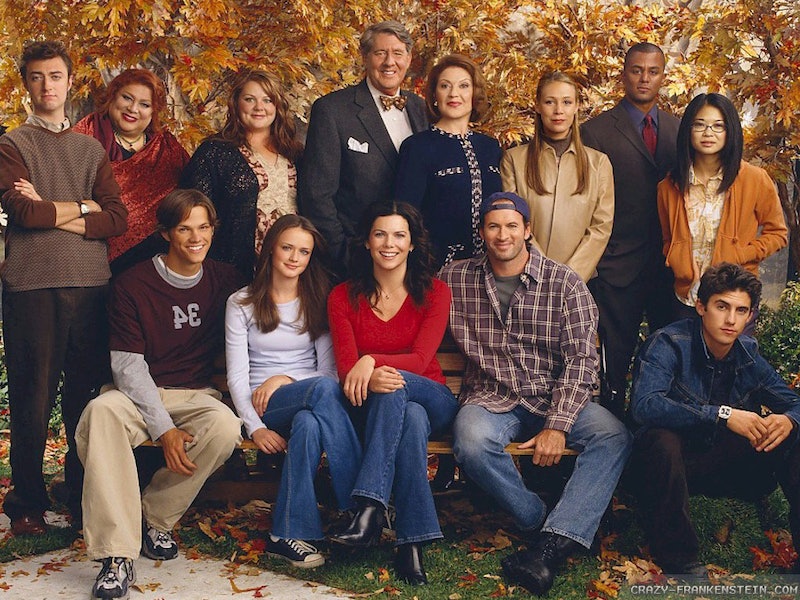 For a show as universally beloved as Gilmore Girls, it's surprising how polarizing its final season truly was, and continues to be, for fans. Then again, those last few episodes were controversial; nearly eight years after the show went off the air, plenty of fans (including myself) still find themselves arguing over whether Lorelai should ever have reunited with Christopher, whether Lane should've had those babies, and whether Rory really would've missed out on a cross-country amusement park adventure just to report on some up-and-coming Senator (thanks, Obama).

Yet while the events of Gilmore 's final season may not have been what some fans of the series would've wanted, at least the series finale gave us some type of closure. Lorelai got together with Luke, Rory started her first real job, and all of Stars Hallow got together for a traditional epic goodbye. The episode attempted to assure viewers that their beloved characters would go off to find happiness and success, and in many ways, it worked — does anyone doubt that Rory is some hot-shot journalist in D.C.? — but that doesn't mean I still don't wonder what, exactly, became of the Gilmore Girls and their friends. Here's what I think they'd all be up to in 2015:

Lorelai and Luke are still happily together, and not only did they manage to finally get married, they now have a daughter. Rory dotes on her, April tolerates her, and although Luke grumbles about only being around girls, he totally loves it. Lorelai's still running the Dragonfly, which has become a huge success, thanks in part to gorgeous renovations funded by Emily and Richard. She visits Rory (more in that in a bit) at least once a month, and although she grumbles about it, still goes to Friday Night dinners — but this time, she drags her youngest daughter along. In less happy news, after some health scares, she's now coffee-free — and although her body appreciates the switch to decaf, Luke's Diner nearly went bankrupt.

Rory is taking over the world, one newspaper byline at a time. Her work on the Obama campaign was so good that she ended up covering the now-president full-time, and is now one of the lead politics writers for the Washington Post. She splits her time between D.C., Connecticut, and New York; her husband, Jess, is a big-time literary agent there, but he's thinking of moving to D.C. to be with Rory full-time. Currently, she's working on a biography of Madeline Albright; the two met during a conference at the White House, and became fast friends.

After many years, Emily finally quit the D.A.R., fed up with their haughtiness and conservative views ("my granddaughter is working for Obama!") She grew restless at home, however, and decided to enroll back in school. She takes classes on everything from English lit to finance, and is thrilled to finally understand more of what Rory and Richard talk about over dinners. Back in 2012, there was an incident with one of the maids (something about being called a "worthless dunce") that was almost pretty bad, but Emily prefers not to dwell on the past.

Richard was very unhappy that he couldn't teach anymore due to his heart attack, but Rory gave him the idea to do video seminars, and it couldn't be going better. He lectures on a new topic each week, has thousands of subscribers, and he doesn't even have to leave his home (although he still wears a bow-tie every day — what is he, a farmer?) He and Emily are extremely happy, and he brags to everyone he knows about his granddaughter's success in D.C.

Luke's diner is still going strong, despite Lorelai's newfound aversion to coffee. Despite his initial hesitation, Luke finally decided to open up a second diner, but gave managerial duties over to Zack (see below). Most days, Luke is found managing the kitchen, taking care of his kid (and Paul Anka, who Lorelai always forgets she owns), and sending care packages to April and Rory — Lorelai's told him it's excessive, but he just can't resist. In the summer, he'll set out on a monthlong boat trip; he's working on getting Lorelai to agree to come with him, but it's an uphill battle.

Not only is Sookie still the wildly talented, in-demand head chef of the Dragonfly, she's also the host of her own cooking show called In The Kitchen With Sookie and Jackson (he's only appeared a few times, but she felt bad and gave him the credit). Not busy enough? That third child she realized she was pregnant with in 2007 turned out to be twins. Four kids, a full-time job, a successful TV show — it's a lot, but Sookie loves every second of the chaos. Also, Jackson got a vasectomy.

Lane and Zack struggled for awhile after having the twins, The band had mostly broken up, shifts at Luke's didn't pay much, and although Mrs. Kim offered to help, neither of them wanted to take her money. Eventually, though, they found their way, with Zack taking over the second Luke's Diner, in New Haven, and Lane working part-time as a drum instructor. They're certainly not rich, but they're happy, and even Mrs. Kim — who they only let babysit under the condition that religion is not brought up — realizes that's enough.

After attending Harvard Med, Paris became a surgeon, and although she's just in her late '20s, she's already one of the top doctors at Mass-General (where she's dating one of the attendings — what? She likes older men). So what if she intimidates her co-workers and scares away half her patients? Paris is good at what she does, and if I had to go under the knife, I'd want it to be in her hands.

Kirk and Lulu are still living in town, and they have one kid. While the idea of being a father petrified Kirk — and everyone else who knew him — at first, he's turned out to be a great dad. As for work, when Taylor stepped down as mayor (long story, don't ask, involves tomatoes), Kirk took on the job, and Stars Hollow hasn't been the same since.

More like this
All The ’70s Easter Eggs You Missed In 'That ’90s Show'
By Grace Wehniainen
This 'Gossip Girl' Wardrobe Error Has Gone Viral On TikTok
By Alyssa Lapid
At 28, Debra Jo Rupp Was Living A Much Different '70s Show
By Grace Wehniainen
'Brookside' Is Coming Back & Soap Opera Fans Are Going Wild
By Sam Ramsden
Get Even More From Bustle — Sign Up For The Newsletter
From hair trends to relationship advice, our daily newsletter has everything you need to sound like a person who’s on TikTok, even if you aren’t.