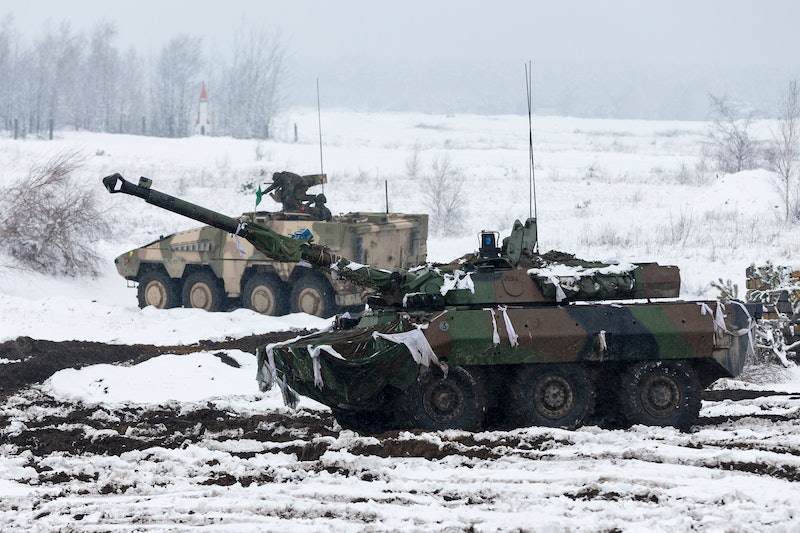 The dust from the eurozone crisis has largely settled, with Germany emerging as the European Union's driving economic force with Chancellor Angela Merkel at its helm. But as robust as the country's economy might be, it seems that someone neglected the defense budget, big time. This week, it was revealed that Germany's under-equipped army used broomsticks instead of machine guns — during a NATO military exercise last year, no less.

In an attempt to cover up the army's inadequacy, German troops painted several wooden broomsticks black to replicate machine gun barrels and attached them to a Boxer armored vehicle during the September exercise with NATO in Norway. Following criticism in Germany, a spokesman for the Defense Ministry attempted to clear up the situation:

This Boxer was a mobile headquarters so it was an HQ vehicle where a weapon is neither foreseen nor necessary. A mobile HQ will always be secured by security forces around it. Why the soldiers then should have mounted a broomstick we can't explain that.

However amusing as the revelation might seem at first, it points to a worrying situation of an ill-equipped army whose government is the chief force behind efforts to de-escalate the Ukraine crisis. To make matters worse, the battalion involved in the incident belongs to NATO's Rapid Response Force (NRF), a joint task force — which Germany has contributed the majority of soldiers to — that would be the first to be deployed if an attack should occur.

The German army is sorely lacking in equipment, and it's unclear how the NRF would be able to intervene in overseas attacks — 41 percent of the soldiers lacked P8 pistols meant for genuine rapid deployment, and 31 percent were missing general-purpose machine guns, or MG3.

The disclosure comes amid Germany's announcement that it would revamp its security strategy in response to Russia's new policy of using "power politics and military force" to assert its interests. Defense Minister Ursula von der Leyen said, in regards to the strategy overhaul:

Russia's actions in Ukraine fundamentally change the security architecture in Europe... The Kremlin's new policy began long before the crisis in Ukraine and will occupy us for a very very long time to come.

But the army's sorry state of equipment might not have been such a surprise, after all — according to The Washington Post, the parliamentary defense committee was informed last year that most of its fighter jets, as well as helicopters and a range of weapons were either not ready for use or damaged. The report led a number of German politicians to call for more spending to fix the widespread problems, but it seems not much has been done thus far.