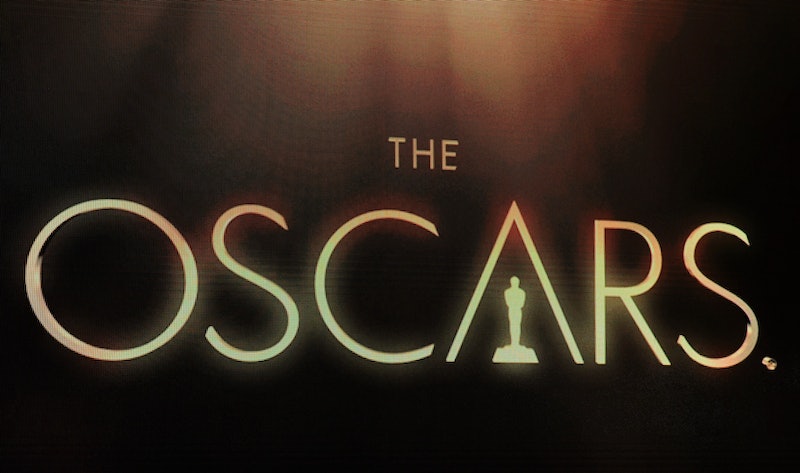 The biggest night in Hollywood is almost upon us: The 87th annual Academy Awards will air on Sunday Feb. 22, which means it's only a matter of time before we find out who will earn the entertainment industry's most prestigious awards. Though each category has frontrunners, it's really anybody's game at this point — especially when it comes to the Best Picture category. Will it be Birdman who takes home the major prize? Selma? How about The Theory of Everything? All will be revealed Sunday night... at the very tail end of the Oscars. Be patient, cinephiles.

But while the films and performances being celebrated may be the reason for the show, it's not the only reason to tune into the Oscars. The Academy Awards are entertainment in themselves, and there's plenty to look forward to this year: The list of presenters includes major stars like Jennifer Aniston, Ben Affleck, and the just-added Dwayne Johnson — and while we don't know for sure yet if red carpet favorite Jennifer Lawrence will attend the award show, at least we'll have host Neil Patrick Harris to thoroughly entertain us. But, what do we actually want to see come Oscars Sunday? Forget the typical "heartwarming acceptance speeches" — here are the small, random things that I secretly want to happen at the 2015 Oscars.

An insane performance by NPH himself

Multi-threat Harris (triple threat just doesn't seem to cover it) better give us an opening number that shows off his Broadway best. An original song about the movies, a la Hugh Jackman's Oscar tune, would make me the happiest viewer.

I know, I know — Andrew Garfield isn't nominated for anything. But he better accompany his girlfriend Stone. They always make cute eyes on the red carpet and I want this to be a thing.

Someone new to trip on the stairs

We can't leave all the falls to Jennifer Lawrence.

A celebrity to bring a kid as their date

I always found it so cute when actresses brought their adorable children as their "date" to major award shows. How awesome would it be to get to cheer your own mom on at the Oscars?

Someone to pull a Kanye West at the VMAs

Michael Keaton in a Batman costume

In some sort of Birdman stunt, naturally. Bonus points for the show if he actually arrives in costume and stays in it all night long. I'd give Keaton the Oscar for that.

I doubt Streep will really take home the Best Supporting Actress Oscar for Into the Woods. But she is presenting this year, which means that she'll grace us with her presence from more than just her seat in the audience. Yay! Do something cool, Meryl. Like a backflip. Or something.

Even better if the person or film who wins truly deserves it. There's nothing like an awesome win for the underdog to get people to think that the Oscars maybe aren't all about Hollywood politics.

Love Oscars fashion, but since when did we all decide that it was okay to be crazy basic with our outfits? I mean, sure, long, silky dresses are pretty, but if anyone ever wants to pull off a Lady Gaga-inspired get-up, I would not complain.

And by "eye candy" I mean lots of Chrissy Teigen and John Legend. Beautiful apart, more beautiful together. It's science. And math.

Some major eye rolls from David Oyelowo and Jennifer Aniston

Sure, they're waaaay too classy to show signs of their anger towards being Oscar-snubbed, but that doesn't mean their visible reactions can't go on my wish list. (While we're at it, let's have Selma director Ava DuVernay go in on it, too.)

Me, in the audience

A lady can dream, can't she?