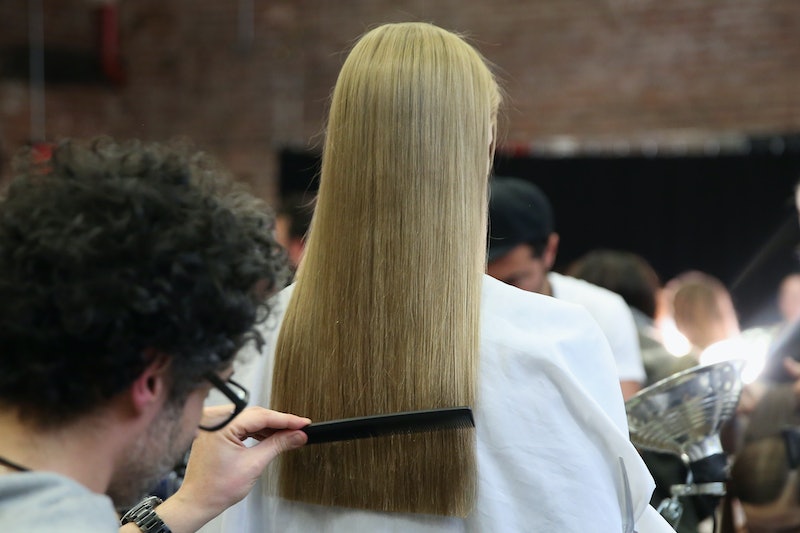 Fashion Week is all about excess. Tons of flowing champagne, sky-high heels, gorgeous gowns down to there, and long, fairytale locks to match. You can never have too much of a good thing and Donna Karan, who used $35,000 worth of extensions on her models, apparently agrees. Yup, you read that right — $35,000 in fake hair that would make even Rapunzel jealous.

Elle magazine went behind the scenes at the Donna Karan show and spotted a long table full of soft, luxurious extensions. "It's a lot of weave," admitted the show's hair stylist Eugene Souleiman. But, hey, Carrie Bradshaw liked seeing her money hanging in her closet, and I guess Donna Karan just prefers it glued to her models' heads. Ehh, to each their own...

So, what do those pricy locks look on top of one's head? Surprisingly clean and sleek. Souleiman sheared the ends of the extensions so they would lay flat against the models' backs. Next, they were straightened and then deeply parted and slicked down, resulting in a clean and cool silhouette to complement the sharp and polished Donna Karan fall collection.

The look is easy enough to emulate at home simply with a hair straightener, tail comb, and a glossy hair gel (Souleiman used Wella Sculpt Force Flubber Gel for the Donna Karen show). The extensions worth your entire college tuition? That could be just a tad harder to copy.