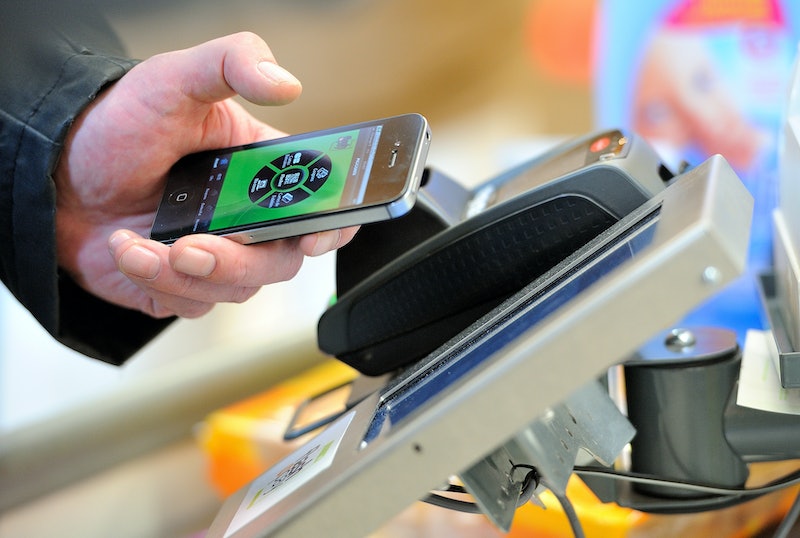 There is truly an app for everything these days: dog whistles, number counters, even a mobile "confession" app for busy Catholics on the go (though the Vatican has warned that ideally, the app should be used during the actual priest confession). Luckily, for every bizarre creation there are a handful of truly useful developments — and many of these new apps are completely revolutionizing the way we live. From apps that allow the user to record police interactions and immediately send them in for review by the ACLU, to Uber's less controversial cousin, Lyft, the smartphone revolution might actually be turning into a human revolution.

Already, iPhone users have the added luxury of Apple Pay — the tech giant's clever new way of getting you to buy more things, and a relatively secure and simple method of making your next purchase at the grocery store, gas station, or shopping mall without having to dig around in your pockets or purse. It's so user-friendly and convenient, in fact, that it's already accepted in over 220,000 locations nationwide and within a couple dozen approved mobile apps as well.

But Apple Pay isn't the only important development in the world of tech devices — there are a few apps out there that are actually transforming our day-to-day activities and giving us the ability to do things we might never have been able to do before.

In 2011, Time Magazine declared "The Protester" its Person of the Year. Last year, the Ferguson protesters were a close second to their final pick (those fighting the deadly Ebola outbreak around the world). A revolutionary era requires a revolutionary app, and international activist organization Witness and mobile coding company The Guardian Project are already on top of it.

With their genius new app Informacam, the two organizations are attempting to give demonstrators, protesters, journalists, and anyone in the middle of a crisis situation the ability to securely document surrounding activity and upload it directly to their network. Using intricate encryption processes, the app will allow the user to immediately authenticate any photos they may take and tag them with relevant data. It's an especially powerful tool, given today's courtroom climate. Before, lawyers and court officials could wave off mobile documentation by alluding to potential tampering; with the Informacam app, the photo is immediately dated and archived in the exact state in which it was first snapped, and backed up by an extensive wave of secure code. At the moment, the app is in beta and will only be available to Android users once it's finally released to the public.

Be My Eyes is more than just an app — it's a significant step forward for those with visual impairments. The app, which was developed by the nonprofit Be My Eyes and Danish software studio Robocat, connects smartphone users worldwide to a vast network of "sighted" and "blind" individuals, allowing them to work in conjunction with one another.

Here's how it works: When a blind user comes across an activity in his or her day that, quite literally, requires a second set of eyes (e.g. checking the expiration date on a dairy product or finding out which gate number from which their flight or train will be departing), they open up the Be My Eyes app and request to be connected to a "sighted" user. Once connected, the app opens up their video camera, enabling them to show their partner what it is that they're trying to figure out. The sighted user can then chat with them over the speaker phone and tell them what they're seeing, allowing the blind user to make their next move. As far as revolutionizing the world goes, this app ranks pretty high on the importance scale.

In a world where women are still twice as likely as men to fear walking home alone, and are being told to change their facial expressions in order to deter rape, apps like Safe Trek are vital. Created by University of Missouri graduate Zach Beattie, along with friends Nick Droege, Aaron Kunnemann, and Zach Winkler, Safe Trek ensures that women traveling alone are protected by a simple button which, if released, prompts the user for a secure, four digit passcode. If the passcode isn't typed in within 10 seconds, local police are notified and dispatched to the user's location.

It's a simple enough concept, but it's already doing some amazing things. Because Safe Trek works on a "dead man's switch" concept, there's no need to worry about opening a new app and typing in your information, which is entered after the initial download. In an interview with his alma mater in May 2013, Beattie admitted that the motivation behind the app was to ensure nervous parents of their child's well-being once they were out on their own. "I used to work for New Student Programs [at the University of Missouri], and the number one question parents would ask is ‘How do I know my student is going to be safe when I send them to [school]?’ That was the challenge we were faced with."

Western medicine is headed in a truly remarkable direction, thanks to advancements in science and surgical technologies. Patients are more comfortable than they've ever been and are being cared for by highly skilled (and highly qualified) teams of nurses, doctors, and medical responders. With all of the amazing progress being made in the health arena, it makes sense that a few companies have been trying their hand at mobile app development.

Such is the case with AirStrip, an app that allows physicians and healthcare professionals the ability to view patient vitals from their own home. Not only can physicians and surgeons receive data about those under observation, the app also cuts down the wait time between initial intake and diagnosis — critical in emergency admission. The app itself is only authorized for approved medical providers who have the AirStrip communication device installed in their facilities, but it could signal the beginnings of a medical revolution and completely alter the way doctors and caregivers interact with their patients.