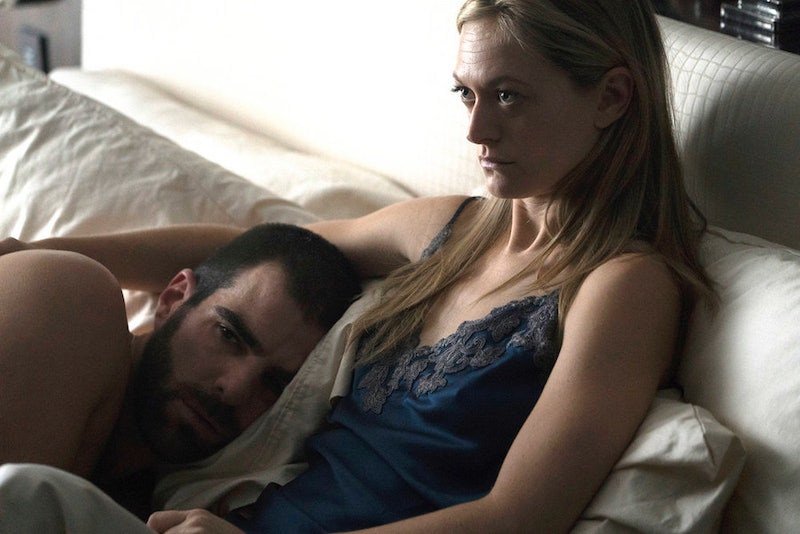 After Zachary Quinto's character Harry slapped Hugo on NBC's The Slap during the first episode, Hugo's parents accused Harry of hitting his wife. At first, I thought it was far too simple to have the man who hits a child also hit his wife, but the Feb. 19 episode showed that Harry does physically abuse his wife on The Slap . The episode revolved around Harry's storyline and we got much more insight into who Harry is — and how he treats his wife Sandi (portrayed by Marin Ireland). The actions show that Harry is not a good man, but don't necessarily make who is right and who is wrong on the show any more clear.

From the introduction to the character Harry, we knew he was an aggressive — and successful — person. Not only does The Slap focus on his wealth (he sells luxury cars), but also that he descends from a family with old school Greek values. (As Uma Thurman's Anouk told him, "You come from a place where men can get away with anything they want.") In the introduction scene of the Feb. 19 episode, the narrator said that Harry needed to feel in control — and showed him telling his wife not to get out of bed (it was time for sex). It could have been an innocent, sexy moment between a loving couple, but the rest of the episode showed that's not the case — it was a power play.

After Sandi asked Harry's cousin Hector (Peter Sarsgaard) for help with the legal actions that Hugo's parents were considering taking, Harry lashed out at her. He grabbed her throat — not quite strangling her — but physically taking over her entire body with his. Their son, Rocco, saw it, and Sandi went running after him, ending the moment. It was hard to know how often Harry physically abuses his wife, but his actions seemed to prove this was not an isolated incident. (Just as Rosie and Gary — Hugo's parents — have been insinuating.)

Harry later kicked a chair at Hugo's home (leading to more legal issues), so he obviously has physical anger issues in all situations (not just in his domestic life). And the way he views people who are less than him (be that the children his son Rocco is competing against, or his own wife) compounded with that violence is truly disturbing. He demands obedience from Sandi (he frequently dictates what he wants her to do), yet he cheats on her (he's having an affair with his female employee). He wants to be the dominant person in all aspects of his life — at the risk of ruining all of his personal relationships.

I had thought (and hoped) that Harry would be a more complex character. Although I'm still not 100% against him (since I have mad issues with Hugo's parents too), he showed — even beyond when he hit Hugo — what an ugly person he can be.