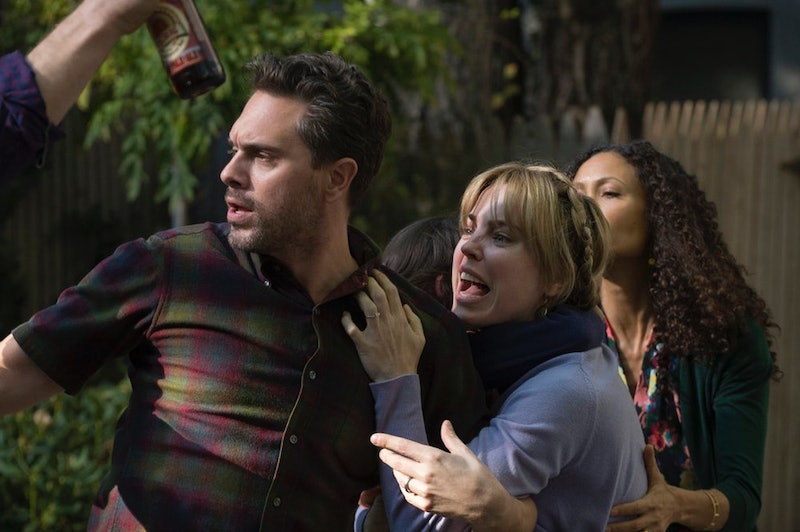 NBC is tackling some serious drama with its new miniseries, The Slap. The first episode "Hector," premiered on Feb. 12 and from what I have seen so far, everyone is wrong on The Slap . OK, maybe it's too soon to say that everyone is wrong (who am I to say who is wrong or right, ya know?), but the adults are definitely handling every situation thrown at them in the worst possible manner.

The main premise of the miniseries (based on a novel and adapted from an Australian series) is that Hector (Peter Sarsgaard) has a 40th birthday party and his cousin, Harry (Zachary Quinto), slaps the misbehaving child of Hector's wife's friends. Of course, nothing is as simple as just saying Harry is wrong for slapping another person's child. I mean, both Hector and I acknowledge that he's wrong for that, but it's a lot more complicated. (Harry has some serious rage issues though — and the show hinted at a troubled past.)

The child, Hugo, is a terror. We see him pulling out Hector’s records, running into adults, destroying Hector's garden, slamming a tablet, and swinging a wooden baseball bat at other children (the last antic is what pushed Harry over the edge). Hugo also kicked Harry when Harry tried to discipline him, and that's when Harry slapped him.

But as Harry himself said, he doesn't blame the child (he just hits the child? Uh, sure. That's reasonable?), he blames the parents Rosie and Gary. We had seen Rosie breast-feeding Hugo, which is all fine and good except for the fact that Hugo is 4-years-old (I had actually thought Hugo was older, which was even more disturbing). But besides the ick factor, Gary spent the party getting drunk and neither adult really attempted to have their child behave.

Beyond the titular slap, we also have Hector toying with the idea of an affair with his children's babysitter/wife's employee, the under 21-years-old Connie. And Hector's wife, Aisha, is rude when Hector's parents give them all a trip to their home country Greece. (I knew where she was coming from, but sometimes you gotta play it cool.)

What makes me mad at the adults most of all (particularly Harry, Rosie, and Gary — the main slap people) is that they are letting their personal beef interfere in how they treat each other's children. Harry and Gary obviously despise each other and antagonize one another. Gary already threatened to sue Harry for the slap — and his motives seems more targeted at getting back at Harry than actual concern over his child. While Harry will not admit that he was wrong for being physically violent toward a child. Case in point, Harry called Gary a "lazy hippy" and Gary called Harry a "pig" just moments after the slap.

With seven more episodes to go, I'm sure I'll get more outraged at the adults in The Slap. So far, the children are the best behaved characters on the show. Excluding Hugo though, of course. He may still be the worst.