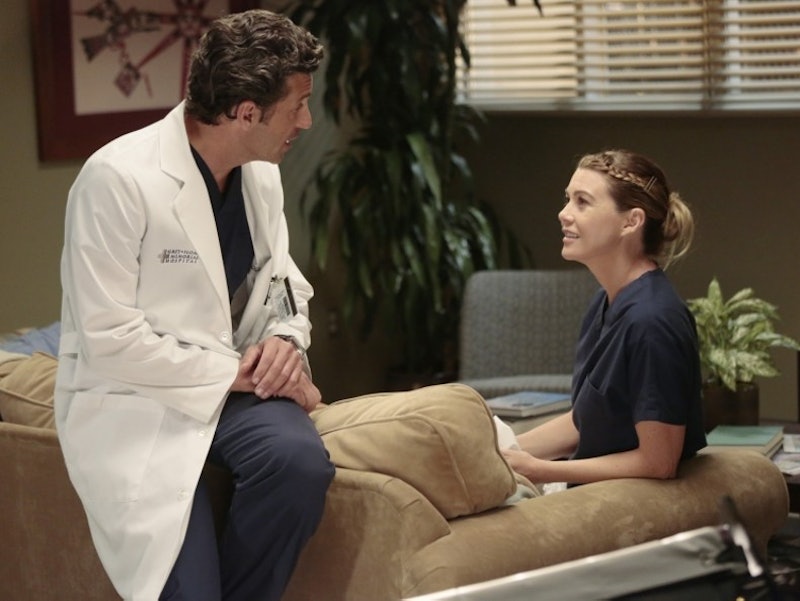 Patrick Dempsey hasn't even been on Grey's Anatomy lately, but his character is still very much the center of one of the show's biggest couple dramas. On Thursday's episode, viewers learned that Meredith Grey doesn't want to be with Derek Shepard, at least for right now. The couple has been having problems since last season, but I was optimistic they'd work things out. However, it looks like I might be wrong.

A few episodes ago Meredith and Derek had a touching phone call where she confessed that she didn't want his move to Washington D.C. to be the end of them. My inner MerDer 'shipper cheered to think that the pair might reconcile after all. Unfortunately things went awry on Thursday, as they always do when Meredith Grey is involved. Damn Meredith and her fear of commitment.

Last week, Meredith decided to fly to D.C. to surprise Derek. Only she never showed up. Her concerned half-sister Maggie asked Meredith where she did end up going with her suitcase full of lingerie, and I feared the worst. But don't worry, Meredith didn't cheat on Derek. However, her Derek-less weekend still proved disastrous for her initial wish to fix her marriage.

Rather than get on a plane, Meredith checked into a hotel and spent three days alone. No kids, no work, and no Derek—and she loved it. Maybe a little too much. She avoided fighting with Derek and she avoided all of her other responsibilities, so it was a win-win for her. There was literally a montage of her jumping on the bed in her underwear, drinking from the minibar, and talking to the television.

I think she's officially lost it. I get why she was nervous to see Derek. As she said, she was worried he didn't still want her. "What if I got off the plane and he wasn't happy to see me?" she fretted to Alex. Look, Mer, I know you're troubled by most of life. But Derek loves you despite everything. Unfortunately Meredith doesn't seem to see that. And she loves being independent a little too much for her own good. "I don't want to leave him, but I do not want to be with him right now," she told Alex. "I don't know what's going to happen with us."

My biggest problem with her behavior is that it didn't just center on Derek. No, she seems to be annoyed with all of her responsibilities. "For three days I wasn't anybody's doctor or wife or mother, I was just myself and I kind of like it," she told Alex about the allure of being alone. It seems Meredith is unhappy, but it also seems Derek isn't the root of that unhappiness. She didn't just escape him when she ran away that weekend. She escaped her life. And that's fine to feel the need for a break, but Meredith needs to be very careful that she doesn't confuse her need for me-time with a desire to end things with Derek.

A divorce is a pretty big thing to go through when the solution to Meredith's problems could be a little vacation away from her responsibilities and a chance to rest and regroup. If Meredith is truly happy without Derek, fine. But I just don't want to see her turn on something good because she's overwhelmed or afraid. She's stronger than that, and she deserves better.