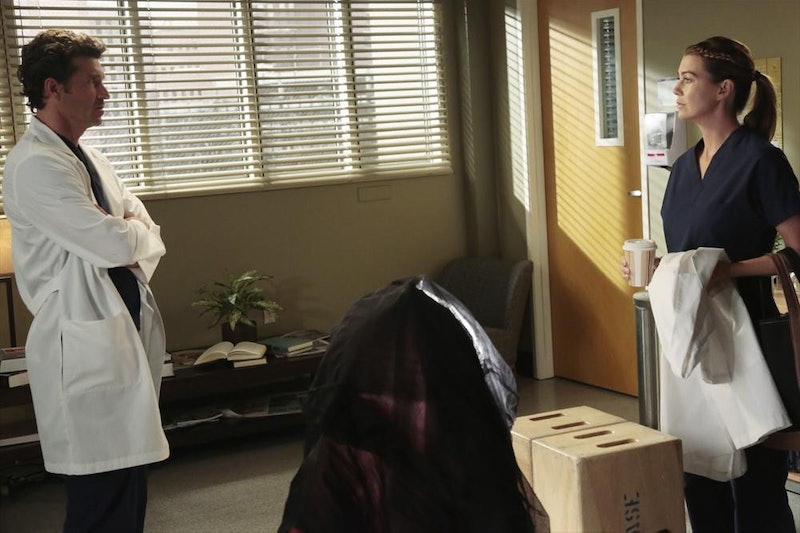 You guys, I am totally bugging. You see, I’ve been a Grey’s Anatomy fan since the show’s inception (ugh, how great was that shortened first season, though?), and from the time Patrick Dempsey held a pillow over his man parts after his and Meredith’s one-night stand, I’ve thought they should be together. Yes, even after it turned out he had a wife, and yes, even after he didn’t put her name on the medical research project they clearly did together. What can I say? I’m just a sucker for love. When they finally got married and started their family, I was all on board: Let everyone else suffer from relationship problems! I went full Chris Crocker: Leave Mer & Der alone! Which is why I’m stressing out about Meredith and Derek's relationship in Grey's Anatomy Season 11 so far.

After way too much talking about it, Derek has gone to Washington, D.C. because the President of the United States (who I assume is Fitzgerald Grant, because all worlds in Shondaland are the same) wanted him to be his doctor or something. Obviously, living 3,000 miles away from your spouse isn’t exactly conducive to a marriage, especially when there are some pretty big egos in regards to their respective careers. Even after all these years together, Mer and Der have really not learned to compromise.

So with all this distance and animosity between them, will this Grey’s power couple make it to the end of the season (or to the end of Patrick Dempsey’s and Ellen Pompeo’s respective contracts, which have another two seasons on them)? Maybe, but it’s going to be a bumpy road ahead. Justin Chambers, aka Alex Karev, told TV Guide that Alex and Meredith have “an emotional affair in a sense,” because Meredith is constantly leaning on him in Cristina’s absence. Meredith, you need to be able to tell your husband some things, too, and let Alex be with Jo.

Another obstacle in the way to their happy marriage? Meredith is still super resentful of Derek and his new job. Of separating her major characters, showrunner Shonda Rhimes told TVLine, “Things are always difficult when people grow apart, and sometimes they don’t grow back together, which is always the worst. Meredith is having a very difficult time.” Rhimes also noted that this will be the “season of Meredith” coping through all of her abandonment issues, which raises the question: Did Derek technically abandon her if she basically pushed him out of the house to take this presidential position? Has Meredith finally become her cold, surgeon-hearted mother? It’s impossible to know what’s in the brilliant mind of Rhimes, but she noted in an earlier interview with Entertainment Weekly, “I’m not going to say that Meredith and Derek are never going to break up.” WHY, SHONDA? Why are you playing with my emotions like this?

Will Meredith and Derek be able to stick this out and stay together? Is true love dead? I guess we’ll just have to wait — tissues and wine in hand — and see.