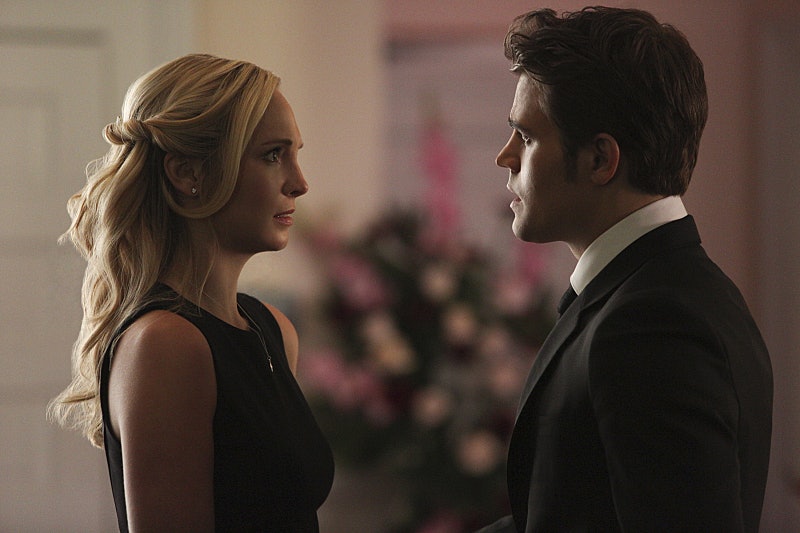 It was a night of endless surprises during Thursday's Vampire Diaries episode "Let Her Go." Not only did we learn that Damon and Stefan's mother is alive and well, but we also discovered just how well Caroline is handling her mother Sheriff Forbes' death. And as it turns out, not well at all. As I feared might happen, Caroline has decided to turn off her humanity, so she won't have to deal with all of her grief. And while I must admit that I'm definitely looking forward to seeing this new side of Caroline, I'm worried about what this could mean for Steroline's future.

Throughout the entire episode, Stefan struggled with trying to figure out if he really felt "that way" about Caroline. The good news is, he finally came to his senses and realized that them being together could be something kinda great. (I mean, duh!) The bad news is, he had this revelation a little too late. If he had just opened up about all of this to Caroline a little sooner or at least not seemed like he was totally against it, she may not have decided to flip her humanity switch. But alas, good timing has never been this show's strong suit.

So where does this leave our two star-crossed lovers? I can't say from experience or anything, but I'm assuming that trying to start a romantic relationship with someone is made a lot more difficult if one of those parties is no longer capable of feeling anything. Then again, I'm not totally against a few hot and steamy hook-ups while this whole no-emotions plotline plays out. Just saying.

In a way, I kinda get her reasoning though. And it was extremely hypocritical of Elena to reprimand her decision — as if she's the only one allowed to escape from feeling sad. So I was happy Caroline threw it back in her face (right before snapping her neck). So get ready, folks. There'a a new Caroline Forbes in town and something tells me it's going to be quite the site to see.