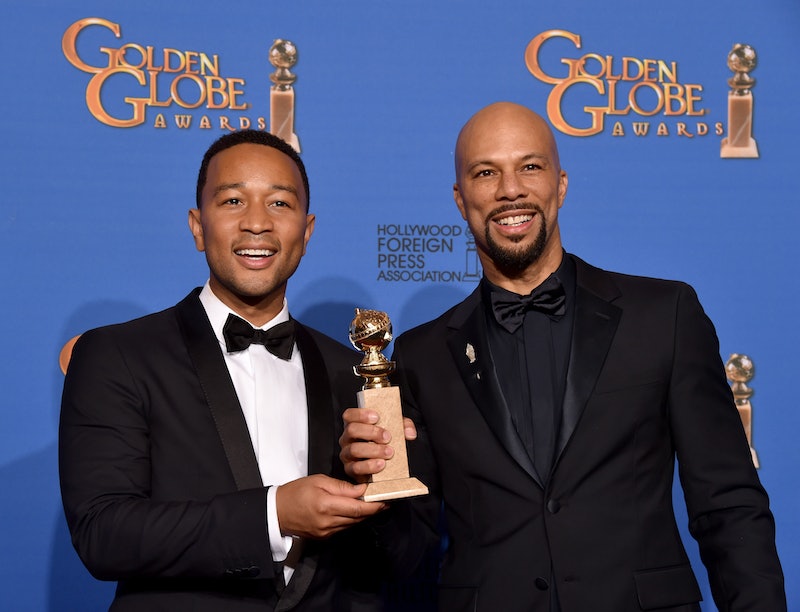 If you're a person who spends the days leading up to the Oscars by returning to the Academy Awards website to scan the list of nominees, congratulations — you're about as cool as me. And if you've been perusing the list, you may have noticed that some people you never heard of are nominated for Best Original Song – so who are John Stephens and Lonnie Lynn? Well, both men are actually mega superstars of the music (and sometimes film) industry. They are John Legend and Common and they are both nominated for Best Original Song for their song "Glory" for the Best Picture nominee Selma.

The Guardian wrote in 2008 that Legend got his stage last name "at the University of Pennsylvania (where he gained his new surname, at first a nickname)." Common is actually Lonnie Lynn Jr. (named after his late father who contributed to his albums with spoken-word poems). Common's debut album in 1992 was released under the name of "Common Sense," but a ska band with the same name filed a lawsuit, so he had to shorten his stage name.

Since the Academy Awards is such a formal event, it's not surprising that the Oscars list the birth names of the musical artists who wrote "Glory." Common may go by Common in Selma (he acts in the film as Civil Rights leader James Bevel), but the Academy likes to play by the book — birth names and all.

I am a sucker for anything that John Legend does (ah! that voice!) and "Glory" is the best chance that Selma has at winning an Oscar. It was snubbed in every other category besides Best Picture, and based on what we've seen so far this awards season, Birdman and Boyhood are the frontrunners for the night's big prize.

So I'm really pulling for Selma to leave the evening of Feb. 22 with an Academy Award in the Best Original Song category, thanks to the magnetic talents of John Legend and Common.

"Glory" is a great mix of classic and modern with Legend's piano, the choir, and Common's rapping. The song may not be time appropriate for Selma, but it somehow fits and complemented the film as it played during the end credits. Common and Legend's song "Glory" has the stiffest competition in the lighthearted fare of "Everything Is Awesome" from The Lego Movie (another movie stirring Oscar snub conversations). Although "Everything Is Awesome" gets stuck in my head almost instantaneously, the power and weight of "Glory" is hard to deny.

So, here's hoping those nobodies Lonnie Lynn and John Stephens can take home the Oscar gold. Plus, I'd love Common to get the chance to give another inspiring speech at the Academy Awards, like he did when the pair won Best Original Song at the Golden Globes.

More like this
Hugh Jackman & Deborra-Lee Furness’ Relationship Timeline Started With A Mutual Crush
By Hugh McIntyre
The Tragic Reason Elvis Never Toured The UK
By Sam Ramsden
Photos Of The 'Elvis' Cast vs. Their IRL Counterparts Will Have You All Shook Up
By Grace Wehniainen
Taylor Swift's “Carolina” Theme For 'Where The Crawdads Sing' Soundtrack Is Here
By Jake Viswanath
Get Even More From Bustle — Sign Up For The Newsletter