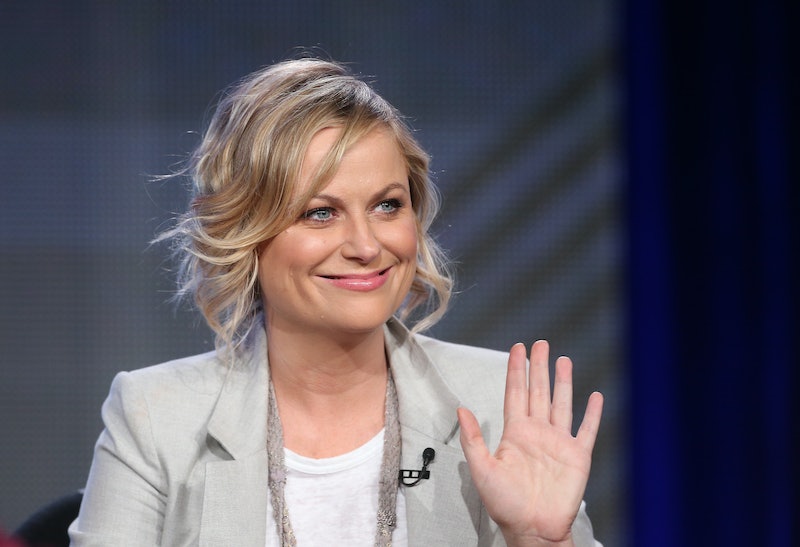 The Parks and Recreation family, which has brought us so many laughs and important life lessons over the seasons leading up to the series finale, is going through an incredibly tragic time at the moment. Executive producer Harris Wittels died at age 30 on Thursday of a reported drug overdose, and, ever since the news broke, numerous celebrities and comedians have responded to Wittels' death with their condolences and support for the Parks and Rec family. Thursday night, Amy Poehler opened up about Wittels before she went onstage at the unite4:humanity gala in Beverly Hills, and her words are sure to send some much needed comfort and strength to everyone who is suffering from this loss.

"Today, I lost a friend," Poehler revealed to Variety. "I lost a dear, young friend in my life who was struggling with addiction." While a drug overdose has yet to be confirmed to be the cause of Wittels' death, it is true that he had been suffering and, according to E! Online, even allegedly done a stint in rehab in order to combat the disease. Until we have a cause of death confirmed, we cannot speculate, but Poehler's speech did not simply stop there. She went on to say:

"I'm sharing it with you because life and death live so close together, and we walk that fine line everyday. When things happen in our lives, we turn to the people that we love… and we lean on people, in a hope that we will ease our pain. So, I don't really feel like telling any jokes. I'm kind of sad, and it's really great to be here tonight and listen to all of you, and listen to the great work that you do and be reminded why we live in this bizarre planet called ‘Hollywood'. It's very strange."

Poehler's speech is a poignant and emotional burst of seriousness from the comedic actress, though that's hardly a surprise. The woman behind the amazing character that is Leslie Knope is hilarious, but she is also intelligent, passionate, and proactive when it comes to causes and people that she has deemed worthy of her dedication. To see her on a stage and not smiling must have been jarring to an audience who was probably expecting another funny, quotable Poehler speech, but the fact that she took the time to honor a fallen comrade and express her grief by sharing it with the entire room was very brave of her. And, in the end, her speech still turned out very quotable — because there is a lot of solid advice here for how others can deal with their own grief, whenever tragedy may strike.

These words can't have been easy for Poehler to say, nor could this appearance have been easy for Poehler to make despite having been committed to it before her circumstances changed, but she still did it. She still tapped into a well of personal strength and made her appearance, but made it her own way: real and raw and touching. It's just one of many reasons that Poehler is a heroine to so many people, myself included.