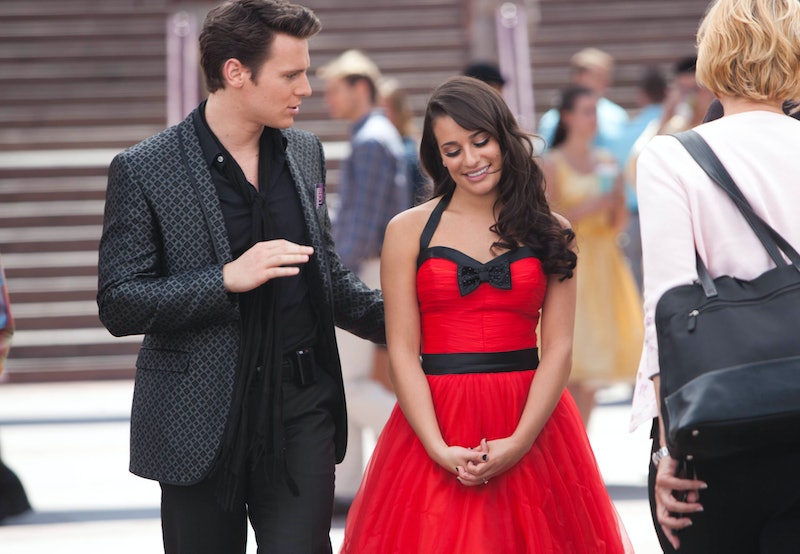 Just as the Glee fandom was starting to settle into the reality that Rachel & Sam appeared to be the show's new endgame, news comes along that puts all of that into question. After spending most of the first half of Season 6 slowly setting up the Samchel romance, it seems odd that the writers would suddenly derail those plans with only six episodes left in the show's history. And yet, that's exactly what's about to happen, thanks to the return of a fan-favorite character. Jonathan Groff — who plays former Vocal Adrenaline lead singer Jesse St. James — is due to pop up on Glee later this season, for the first time since Season 3's Nationals episode.

Groff's impending appearance on the show was spoiled in Fox's press release for the Mar. 13 episode, "We Built This Glee Club." The short plot description reads as follows:

New Directions and the Warblers go head-to-head at sectionals. Meanwhile, Rachel must choose between returning to NYADA and doing another Broadway show with her past love, Jesse St. James.

Already, this spells trouble for Samchel. Sam has made it very clear that he's happy in Ohio. He gave NYC a shot, but he didn't particularly enjoy his modeling career nor did he fit in in the Big Apple. And we've all known that Rachel was destined to head back to the city that never sleeps. So any future for Samchel would require a compromise. Would Rachel give up her dreams — again — to stay in Lima with Sam? Unlikely. Would Sam give up his career in Ohio to move back to NYC with Rachel? Maybe, but would she want him to? Or would they attempt a long-distance relationship? The writers have already made it abundantly clear that they don't think those can work.

So if Rachel really is choosing between Broadway and NYADA, that means that either way she's headed back to New York... and towards a break-up with Sam. But there's another reason Jesse's return to Glee spells trouble for the show's newest couple. Thanks to spoilers, we know that the series finale, titled "Dreams Come True," will involve a flashforward. We know this because of a casting call for red-headed twins, reported to be Will & Emma's 4- or 5-year-old children alongside a now 7-year-old Danny Schuester. Apparently part of this flashforward will involve a scene at the Tony Awards. We know the show did a location shoot at the Los Angeles Theatre, and the hashtags on this photo of the location confirm the rumor:

OK, so what does a flashforward and the Tony Awards have to do with Samchel? Good question. Twitter user Allie took it upon herself to go to the location shoot and scout out who was there:

Oh, and guess who else was there:

But was the star of Girls, The Book Of Mormon, and Hedwig And The Angry Inch just hanging out with his Broadway friends Jonathan Groff and Lea Michele, or is he actually shooting a guest spot for Glee?

Rannells himself confirmed the fact, Instagraming a picture of himself and Groff dressed up inside what's clearly the Los Angeles Theatre:

So, to recap: There's a flashforward in the series finale; there's a scene at the Tony Awards; and Jonathan Groff will be there. Why is this important? Because a person claiming to have been an extra during the Tonys scene spoiled the fact that Rachel wins an award; during her speech she thanks Mr. Schue, Jesse, Kurt, and Finn; and that "St. Berry is endgame." (St. Berry is the shipper name for Rachel and Jesse.)

So what was the point of even introducing Samchel if St. Berry was just going to end up together in the series finale? For one thing, the writers might not have known when they started the season if they were going to be able to get Jonathan Groff on the show, so they hedged their bets with Samchel and then changed their plans when Groff signed on. But I prefer to think that Samchel was always supposed to be temporary and not endgame. While their paths are leading them in different directions, they have been very important to each other in a short period of time — Rachel helped Sam move on from Mercedes, and Sam helped Rachel realize it was OK to open her heart again after Finn's death. Now she's ready to move on, pursue her dreams, and find true love again.

Clearly the writers seem to think that Jesse is her true love. But is he? He broke Rachel's heart in Season 1, betraying her and defecting from the New Directions back to Vocal Adrenaline, and then egging her in the parking lot right before Regionals. He got a bit less egomaniacal with each of his return visits... if no less pompous. He tried to win Rachel back during Season 2's prom, but just ended up getting in a fight with Finn. Then he appeared as Vocal Adrenaline's coach during Season 3, and talked Whoopi Goldberg's Carmen Tibideaux into accepting Rachel to NYADA.

There's no denying that Jesse is probably the character on Glee who understands Rachel the best. They have similar passions, similar goals, and they're similarly driven to achieve them. In that sense, they're a perfect match. But is a male version of herself really what Rachel needs? What made Finn so good for her was his ability to rein in her craziness and bring her back down to earth. Rachel and Jesse both exist at a constant Level 10, which sounds like a recipe for disaster to me.

But maybe Jesse will finally have changed by the time he pops up for Sectionals this year. Or maybe that "extra" was just making stuff up and St. Berry isn't endgame, after all. We'll just have to wait and see for ourselves. The only thing that seems certain at this point is that Samchel was sadly never meant to last.