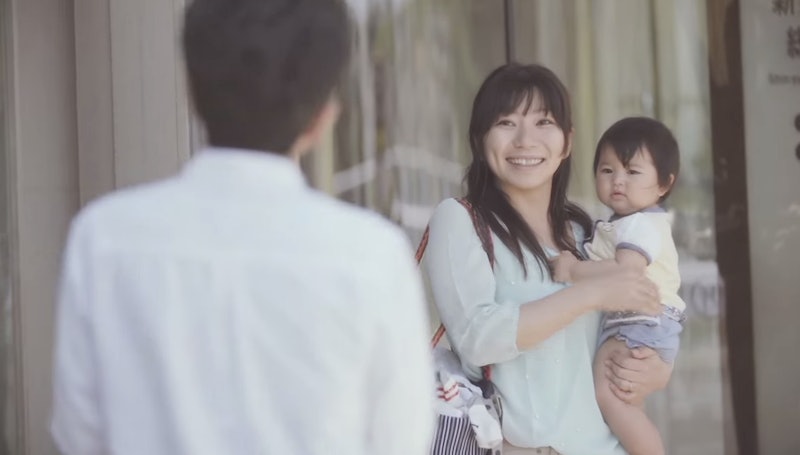 Guys, when you think about all the stuff moms go through, you the fact that we have a Mother's Day and not a Mother's All The Days is kind of insulting. I, for one, was so terrible in my first year of existence that a seasoned babysitter once broke down and quit after telling my mom she sometimes daydreamed about throwing me out of a window. (I've seen the videos of little me and I was a total monster, to be fair.) And even though all the thank yous in the world will never be enough, these moms who were surprised on their babies' first birthdays are at least getting some of the appreciation that all moms deserve a lot more of than they get.

The video, an ad for Pampers, follows the unsuspecting mothers taking their babies in for their 12-month check-ups. Little do they know that the dads of these remarkably well-behaved babies (seriously, even I'm not that decent in public as an adult) had set up a series of pictures of the moms with their babies from the whole year, so that when they emerged from the doctor's office they saw them all on display with sweet notes they left next to them. As you can imagine it was instant tears for everyone: the moms, the dads, and every human watching except these seriously confused babies. And because dessert is the only way to celebrate any true milestone, the dads were also waiting outside the doctor's office with a cake for the moms, because it's "mom's first birthday" too.

This video will fill you with all sorts of feels, but more importantly, it will remind you to give your mom or whoever dealt with your baby self a hug or a heartfelt fist bump way more often than you already do. They put up with all of your shenanigans and lost sleep and got spit-up all over themselves for you, and a lot of them didn't even have partners to rely on while they did it. Really, the least we can do is give these parenting champions some cake.