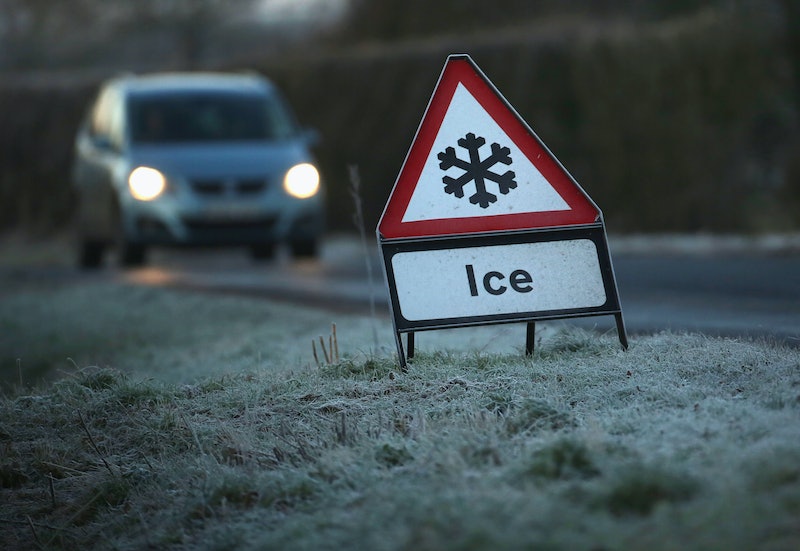 I'm sure you've heard people complaining about how cold it is outside — especially if you're in the Northeastern United States — but things keep happening that illustrate how frigid it is better than words can say. Whether it's cars leaving behind ice skeletons or entire landmarks freezing over, it's clear that this month has been one of the coldest in U.S. history. In fact, February is so cold that even Alabama (as in, the state that borders Florida) is feeling the freeze. The cold is so unprecedented for them that they're marveling at it in wonder. And one Alabama news station, WAFF, excitedly reported that water freezes in cold weather. Say what!

On Thursday, Huntsville, Alabama news station WAFF aired a astonishing report that had everyone in the studio flabbergasted. WAFF reporter Muriel Bailey was reporting live from the scene (outside), where the temperature was so low that she could — gasp! — see her breath. "You can probably see some of the fog coming from my mouth as I’m talking," she told the anchors. What is this weather sorcery? They seemed to be thinking. But that's not all. What they discovered next will shock you.

Bailey was so stunned by this strange new weather that she decided to perform her own science experiment. For the news report, she and the team put two cups of water outside earlier in the morning and checked them after an hour and a half. They were amazed to find that the water had ... frozen. Bailey wrote in a Facebook post (which has since been deleted):

So we put 2 cups of water outside this morning and checked them after an hour and a half. It's so cold you can freeze water outside.

This might feel like a familiar notion to you, perhaps because it's common sense, but to be fair, Huntsville, Alabama normally never experiences freezing temperatures. It was 11 degrees Fahrenheit outside when Bailey was reporting from outdoors and that is significantly colder than what the city is used to (the average temperature for Huntsville in February is 45.7 degrees). So it's understandable for them to be in such awe — Alabama is one of the most Southern states in the U.S., after all, bordering Georgia, Florida, and the Gulf of Mexico. It's not a place one would normally associated with sweaters, let alone below-freezing temperatures.

And as a cynical New Yorker, I'm stunned when a stranger holds the door for me, and at times I've been tempted to tell a news station, so I'm not one to judge. But it does make you wonder ... what does Bailey think is happening every time she goes to make ice?