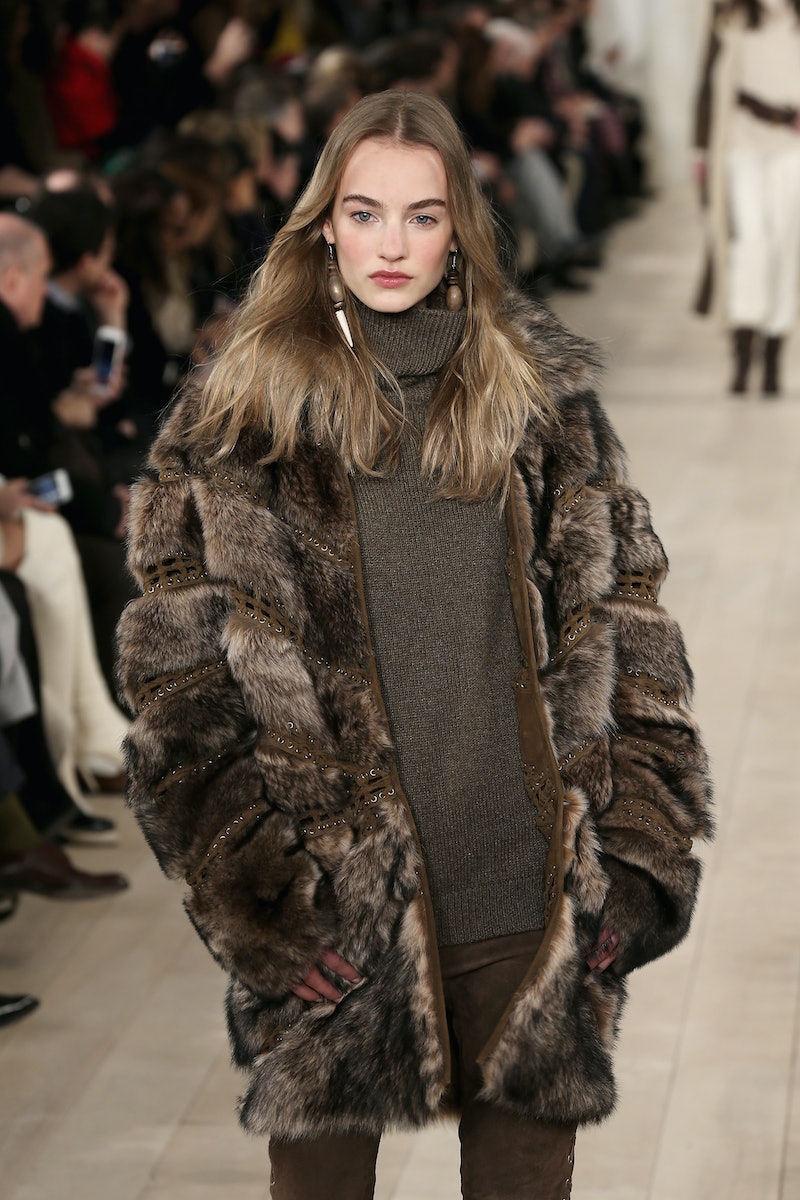 Ralph Lauren's Fall 2015 collection was the designer's take on "frontierswear" — aka, his luxe and modernized update of the American west, which meant a lot of what looked like fur. Well, a bit of good news for any animal lovers out there: The fuzzy fabric in the Ralph Lauren 2015 collection isn't real fur. Vegans still might not be on board, however, as the pieces are still animal-derived.

As Forbes reported, the program for the show called out the designer's "long-standing commitment to not use fur products. All fur-like pieces featured in the collection are constructed of shearling," letting potential critics know in advance that animals weren't simply slaughtered for their skins and for something seemingly frivolous.

However, it doesn't appear to be that simple. Is the usage of shearling humane? Well, as Fashionista notes, shearling is still animal-derived and that it is essentially sheep fur. And, unfortunately, most sheep are slaughtered after they're shorn. Still, a rep for Ralph Lauren told Fashionista that the brand has humane concerns and that it makes sure that it only works with vendors that use skin that can be certified as a byproduct, which means the rest of the sheep is being used for food and other things, rather than being discarded. Again, still not great for vegans.

So, as far as fur goes, this is probably the most ethical choice. Lauren made this collection majorly wearable, a mix of unusually rugged yet totally dazzling, and I'm certainly tempted.

But would you wear it based on any animal sympathies you might have? Can you reconcile that it is, in fact, byproduct of animal that would likely be slaughtered regardless and is therefore not going to waste? Or are you much more of a hardliner, refusing to wear something that once served as the skin of a living, breathing thing?

Could Ralph Lauren deepen or further its commitment to humane concerns by foregoing a fur look altogether and by using totally synthetic materials with hats, gloves, coats, and more?

Well, the truth is, yes, the brand certainly could do that, but would it look as luxe? Probably not.

This is fashion and much of the fashion intelligentsia believes and supports all fashion highs, everything else be damned. Remember Furgate, when Lady Gaga duked it out with PETA over the fact that she couldn't resist the artful look of a fur coat? Whether or not you view that argument as flawed is up to you.

All told, to fur or not to fur is up to the wearer. There are plenty of fashion houses that won't forego fur, so the fact that RL is taking some stance, any stance against what could be considered gratuitous or capricious fur usage is really remarkable. What's that cheesy quote? A journey of a thousand miles begins with a single step... or something.