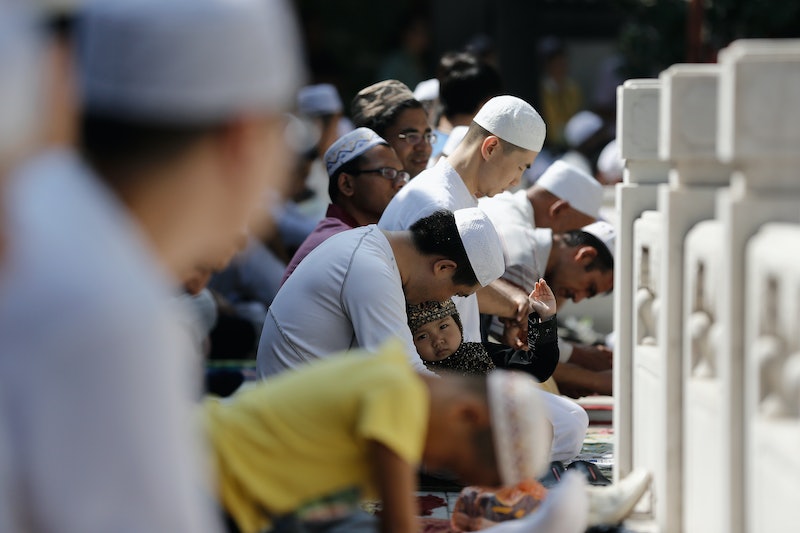 As recent videos have shown, just walking down the street can be a fraught activity for many people, interrupted by unwelcome stares and comments. We saw it when a woman spent 10 hours walking in New York; we saw it again when a Jewish man spent 10 hours walking in Paris; and now there's also a video of a Muslim walking for five hours in Milan. And as it turns out, five hours is more than enough to reveal plenty of Islamophobia.

In the video, Hamdy Mahisen, a student of Egyptian descent, walks through Milan wearing a traditionally Arab style clothing and carrying a Quran. A video camera records his stroll and the reactions of people on the street around him. The whole thing was part of a "social experiment" by the Italian newspaper La Repubblica, and unsurprisingly, it captured a truly unfortunate amount of Islamophobic remarks.

As The Telegraph explains, "Italy is currently on high-alert after a warning that Libyan militants inspired by Isis could make their way into Europe through the country. This has fueled Islamophobia and anti-immigrant sentiment towards refugees who have fled Africa." And it seems that this prejudice isn't just a part of the political realm, but also affecting day-to-day reactions on the street. Here are just a few of the reactions caught on the video (translations provided by La Repubblica):

Several people in the video reference terrorist groups in reaction to Mahisen, most disturbingly a woman with a stroller who appears to turn and shout it at him. Given that these people don't seem to believe honestly that he is a terrorist — I seriously doubt any of them would actually shout such things at someone they truly believed to be dangerous, for one thing — this reaction is a clear demonstration of Islamophobia and ignorance.

Given that Mahisen wasn't doing anything strange or threatening at the time this comment was made, the only explanation I can come up with is that this man assumes all Muslims must be violent. Because that makes sense.... except no, it doesn't.

Curiously, a lot of people seemed to assume that if you see someone in Arab-style clothes, they must be an imam. Because only a religious leader would maybe want to dress in the style of their homeland?

Whether it's people drawing back as he walks past, or this man scooting over further on the bench, a lot of people just seem uncomfortable being in close proximity to Mahisen.

Many of the people who don't seem outwardly hostile or uncomfortable seem to think that Mahisen's outfit is some sort of amusing show, telling their friends to look, or chuckling to themselves or with their friends. Which is not really what most people want when they walk out their front door.

See all the reactions in the video below: