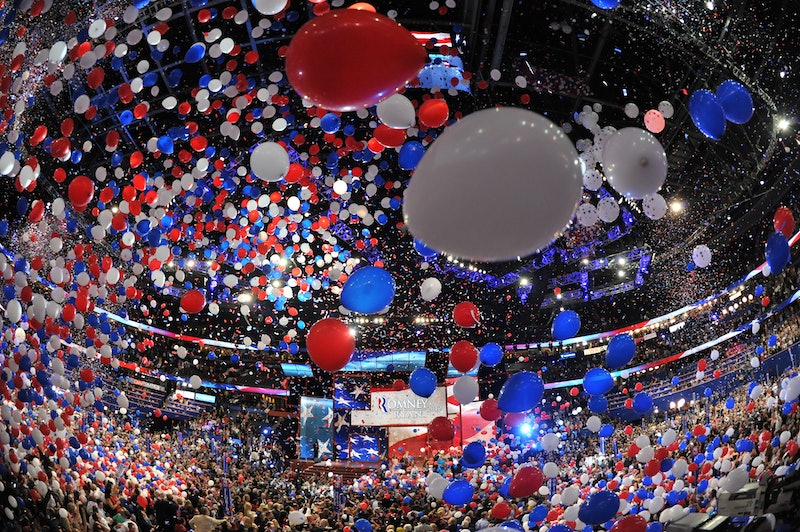 The field of potential Republican candidates seems to grow larger each day. Only one will get the GOP nomination, but there's another coveted position that will become available once the nominee is picked — the role of vice presidential candidate for 2016. It's a big spot that can propel anyone into the limelight, and make no mistake, some of the upcoming presidential candidates won't have lost sight of the vice-presidency, should the actual presidency not work out (we're looking at you, Chris Christie).

In 2004, John Kerry picked one of his former opponents from the Democratic primary — John Edwards. Then, in 2008, we saw President Obama partner up with his former foe: the lovable, if not very awkward Joe Biden. Republicans don't have as much of a history in picking out of the pool of primary contenders. Neither Bush, McCain, or Romney selected a former competitor to be their running mate. But that doesn't mean that will be the case this time — former candidates tend to be on the short list for veep.

Not everyone is a serious candidate in the Republican race. That's not to say that they're not politically savvy or don't have legitimate experience, but they just may not necessarily have the financial backing or a strong enough staff to mount a campaign. Or, maybe, they're just not exciting.

Candidates like Jeb Bush, Rand Paul, and Scott Walker are serious and will likely last awhile in primary. But not everyone has their elephants in a row. So, might some of these candidates be running to get an edge as a potential VP?

The governor was once thought to be a future star of the Republican Party, but Jindal's bland rebuttal to Obama's State of the Union in 2009 didn't do him any favors. Jindal is present in the political sphere, he's sharp, but he just doesn't have any pizzaz — which might indicate why Jindal's last in the polls (2.2 percent, according to the most recent Real Clear Politics average.)

Fiorina is the only women running in the GOP, and she certainly has an impressive resume —she's been the CEO of Hewlett-Packard. But never having held political office could be a problem for her; business leaders tend to not fair well in the primary (most recent example: Hermain Cain — though this probably isn't the most fair comparison).

He might be known as the guy who filibustered while read Green Eggs and Ham to filibuster the Affordable Care Act, but that act isn't getting him the cash flow. Cruz has small dollar grassroots supporters, but the bundlers want nothing to do with him. He also has the awkward task of competing for Texas donors against former governor Rick Perry.

Once Rick Perry got those glasses, we knew he was serious about running for president. He certainly has the look down. But he's still the guy who fumbled in the 2012 debates and didn't know what federal agencies he would eliminate if elected. He needs to polish his debating skills, but more importantly he must know what he's debating. You can't sell an idea unless you know it first.